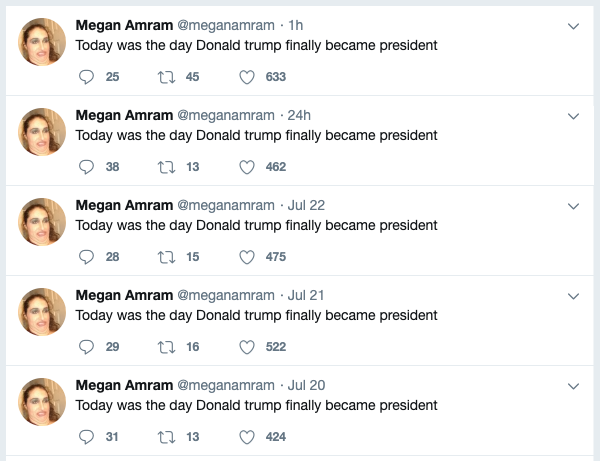 Every day, for reasons best understood by herself, Megan Amram ("it's this weird, sexual, anti-comedy comedy that's 'in' right now") posts "Today was the day Donald Trump finally became president" to her Twitter feed.

Andy Baio has scraped the metadata associated with all 800 of these tweets and analyzed them, finding that the tweets are probably manually posted, mostly between 4-8PM PT (never between 0:00h-07:15h PT), with the average tweet getting 983 likes, 47 retweets, and 44 replies (outliers: six have had more than 5,000 likes, and Aug 21, 2018's tweet got more than 10,000 likes!), though the trend is generally downward.

He's posted his data in a Google sheet so you can do your own analysis.

For the last 800 days, @meganamram has posted this tweet every day. So I scraped those 800 tweets and put it in a spreadsheet to make some charts, like a normal person. pic.twitter.com/pvGOfhXAV6