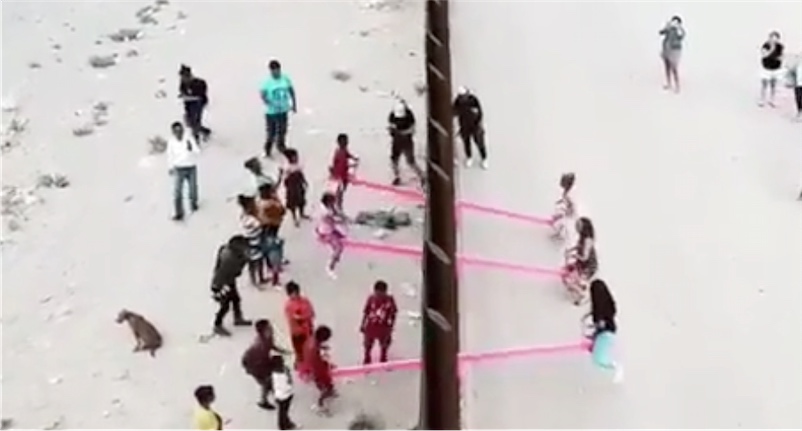 Two artists installed seesaws that cross the border wall between the United States and Mexico, enabling children from both countries to play together. The brilliant creative intervention was created by Ronald Rael, an architecture professor at the University of California, Berkeley, and Virginia San Fratello, a design professor at San Jose State University. From CNN:

In 2009, the two designed a concept for a binational seesaw at the border for a book, "Borderwall as Architecture," which uses "humor and inventiveness to address the futility of building barriers," UC-Berkeley said.

In an Instagram post, Rael said the event was "filled with joy, excitement, and togetherness at the borderwall."

"The wall became a literal fulcrum for U.S -Mexico relations and children and adults were connected in meaningful ways on both sides with the recognition that the actions that take place on one side have a direct consequence on the other side," he wrote.

One of the most incredible experiences of my and @vasfsf’s career bringing to life the conceptual drawings of the Teetertotter Wall from 2009 in an event filled with joy, excitement, and togetherness at the borderwall. The wall became a literal fulcrum for U.S. - Mexico relations and children and adults were connected in meaningful ways on both sides with the recognition that the actions that take place on one side have a direct consequence on the other side. Amazing thanks to everyone who made this event possible like Omar Rios @colectivo.chopeke for collaborating with us, the guys at Taller Herrería in #CiudadJuarez for their fine craftsmanship, @anateresafernandez for encouragement and support, and everyone who showed up on both sides including the beautiful families from Colonia Anapra, and @kerrydoyle2010, @kateggreen , @ersela_kripa , @stphn_mllr , @wakawaffles, Chris Gauthier and many others (you know who you are). #raelsanfratello #borderwallasarchitecture

In 2018, Barry Lawrence Ruderman, a rare map dealer from California, bought a folder of documents and blueprints related to the Statue of Liberty. What they didn’t realize is that the lot contained almost two dozen original engineering drawings for the Statue produced by Gustav Eiffel’s workshop. Ruderman and Alex Clausen, director of Ruderman’s gallery, […]