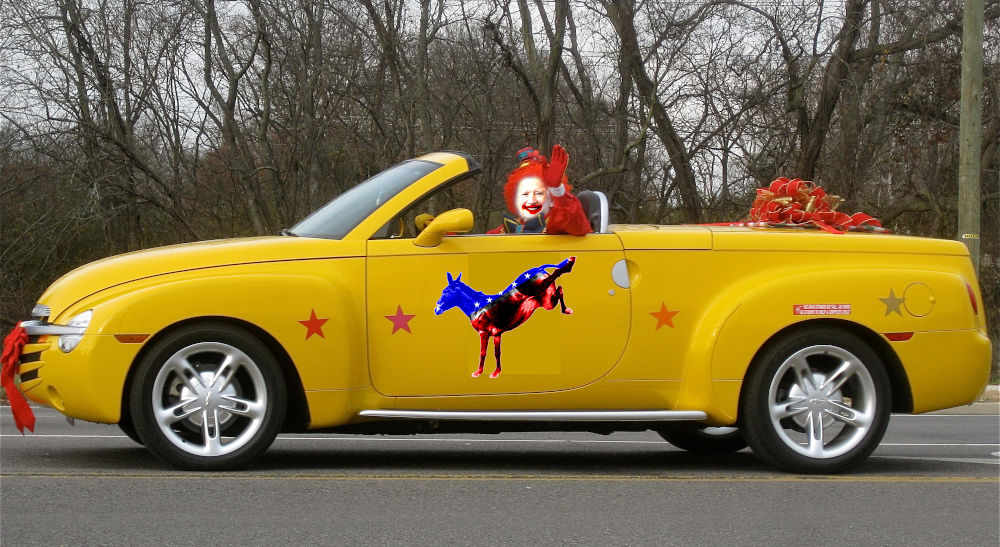 Taibbi's latest, a massive on-the-ground report from the Iowa campaigns of the Democratic would-be presidential nominees, is like having a bucket of ice-water dashed over your head by someone who's telling genuinely funny jokes about how terrible it all is, that ha-ha-only-serious mode that is becoming the motif for our era, in the long tradition of gallows humor in dire political circumstances.

Like Thompson, Taibbi's on-the-ground reporting from Iowa is marked out not so much by his insights into the candidates, but rather, his expert and nuanced reading of the animal sentiments they arouse in the crowds they address, and in Taibbi's long memory for other political moments in which similar candidates said similar things to exactly the same people (this being Iowa, which, thanks to a quirk of history, is the hot ticket of American politics).

Taibbi's read on the Democratic leadership race is that it is doubling down on the GOP's "clown car" blunder, which let Trump take nomination from a crowded field of political same-sames who were unable to confront Trump's "Throw the Bums Out" movement because they were the bums that the body politic wanted thrown out. He sees this as an indictment of the Democratic Party, which might be breathing its last gasp, along with America's commitment to democracy itself: "Lose to Donald Trump once, shame on the voters. Lose to him twice? It’s glue-factory time for the Democratic Party, and another black eye for America, which is fast turning its electoral system into a slapstick reality show."

Taibbi's criticism is complex and contradictory: he says that the Dems can only win by showing "true inspiration," but Taibbi is also skeptical of the bold policy proscriptions of the likes of Elizabeth Warren ("voters will soon be introduced to the fact that plans and promises similar to the ones Warren is making have been made many times before. It’s not a referendum on her but on how much belief is left out there"). This contradiction is at the heart of the conundrum the Democrats find themselves in: wonkish expertise is a good look for someone who wants to contrast themselves from Trump's chaotic administrative incompetence, but generations of triangulating politicians (most often Democrats) have poisoned the well by using plausible-sounding technocratic language to justify bank bailouts, mass incarceration, betrayals of trade unions and working people, mass privatization and other Clintonian/Obamaesque sins.

So the Dems are left trying to fit their platforms into Trump-scale tweets: "The Democrats’ basic pitch reads like a list of five poll topics: kids are in cages; let’s close the gun-show loophole; this administration’s policies are an existential threat; something something Mitch McConnell; and Trump is (insert joke here)."

Combine a crowded field with mere sloganeering and the debates descend into parody: "Mostly the Democrats are taking tweet-size bites out of one another’s hind parts in Heathers-style putdowns, or engaging in virtue-signaling contests, like they’re running for president of Woke Twitter."

And that's before you get to the candidates themselves: irrelevant plutocrats, self-help gurus, small town mayors, a guy who "lost a Senate bid to the world’s most-hated Republican." If you're into schadenfreude, this is where Taibbi shines, taking no prisoners when it comes to the clowns of Clown Car 2.0.

Like this take on Biden: "like if Barack Obama were on vacation, or sick, maybe. Biden’s labors to remind us he was the understudy of the last president are painful."

Meanwhile, Marianne Williamson manages to surprise him by captivating a room full of people in a way that leaves Taibbi half-convinced (and distinctly unhappy) that she is going to take the nomination: "her speech is not a lifeless collection of policy positions. It’s an interesting, tightly written diagnosis of the American problem. Precisely because socioeconomic stresses have pushed them into heightened awareness, she says, the American public sees what she calls 'a transition from democracy to aristocracy,' and the corporate sector’s “insatiable appetite” for money that dominates American life...She describes a two-party system that, at its worst, operates in perfect harmony with the darkest impulses of corporate capitalism, and at best — presumably she refers more to Democrats here — sounds like institutionalized beggary."

Taibbi also nails the establishment's pitch to sideline the newly ascendant progressive wing of the party: "Do we really have to make radical changes? The centrists want the progressives to step aside for the sake of 'unity,' while the progressives believe they’re the new mainstream and are the better bet in a world where traditional notions of electability are upside-down."

On the progressive wing, he correctly identifies Sanders as the prime mover, dragging the whole party to the left, radically resizing the Overton window: "The undeniable truth is that the Democratic race is about Sanders. Most of the candidates either support Medicare for All or try to sound like they do. They also tend to support a $15 minimum wage and call for wealth taxes, a Green New Deal, antitrust actions, and some rejection of corporate donors." He also shows how the press have conspired to downplay Sanders' lead ("the highest number of unique donors... the leading fundraiser overall in the race"), with headlines like "Harris, Warren Tie for Third in New Poll, But Biden Still Leads."

The front-runner — the front-runner! — is septuagenarian gaffe machine Joe Biden, who started running for president in the Eighties and never finished higher than “candidacy withdrawn,” with a career delegate total matching John Blutarsky’s grade-point average, i.e., zero point zero. The summer’s “momentum” challenger is California Sen. Kamala Harris, who spent all year sinking in polls but surged when she hit Biden with “I don’t think you’re a racist . . . but . . .” on national TV.

A third contender is Sen. Elizabeth Warren, a famed red-state punchline who already has 10,000 Pocahontas tweets aimed at her head should she make it to the general. Her “I have a plan for that” argument for smarter government makes her a modern analog to Mike Dukakis — another Massachusetts charisma machine whose ill-fated presidential run earned him a portrait alongside the Hindenburg in a Naked Gun movie.

A fourth challenger, Bernie Sanders, is a self-proclaimed socialist born before the Pearl Harbor attack who’s somehow more hated by the national media than Trump. A fifth, Pete Buttigieg, mayor of South Bend, Indiana, has never earned more than 8,515 votes in any election. The claim to fame of a sixth, Beto O’Rourke, is that he lost a Senate bid to the world’s most-hated Republican. It goes on.

The top Democrats’ best arguments for office are that they are not each other. Harris is rising in part because she’s not Biden; Warren, because she isn’t Bernie. Bernie’s best argument is the disfavor of the hated Democratic establishment. The Democratic establishment chose Biden because he was the Plan B last time and the party apparently hasn’t come up with anything better since. Nothing says “We’re out of ideas” quite like pulling a pushing-eighty ex-vice president off the bench to lead the most important race in the party’s history.