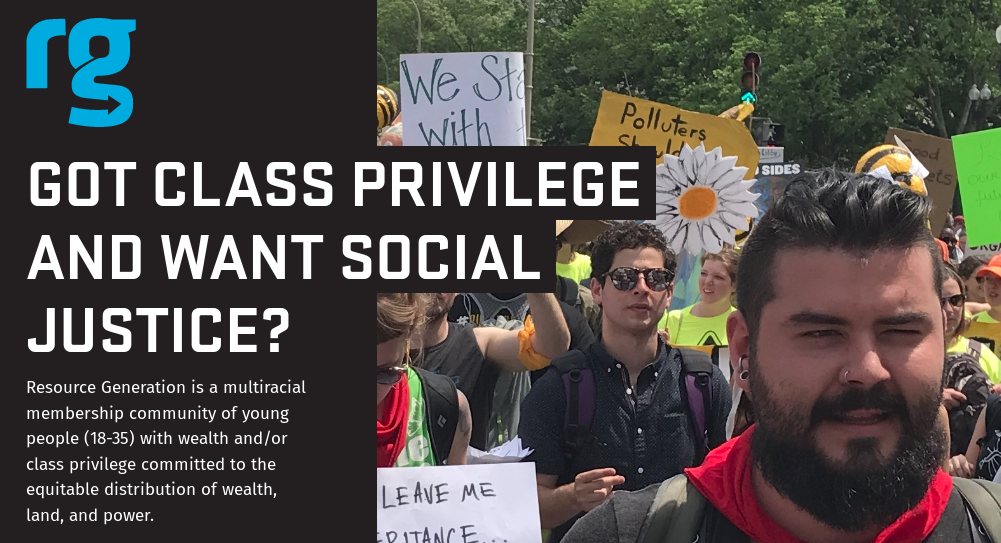 Resource Generation is an organization of young people who inherited enough to be in the top decile of America's wealth distribution, who are determined to give away those inheritances in ways that redistribute wealth and make the country more fair and equal. Their mission: "As part of a coordinated strategy to systematically redistribute wealth and repair the harm created by wealth extraction, RG asks our members to take bold action with the resources currently under our and our families’ control, moving toward greater alignment with humanity and the planet.”"

The organization has 15 chapters of 18-35 year olds, and the chapters coordinate the dispersal of all or almost all inherited wealth and/or excess wealth to social justice movements."

To avoid the trap of philanthropic laundering of their families' reputations (as described in Anand Giridharadas 2018 book "Winners Take All") the group focuses on donations to organizations that empower marginalized communities to decide how the money will be spent, rather than those that allow donors to direct the use of the funds.

The group attracts a lot of skepticism, but Norman Vanamee's profiles of some of its New York members makes them sound like people who had the weird luck to be born into wealth, and the honest self-assessment to recognize that they just got lucky, and that their luck came at others' expense, and that something must be done about it.

T&C: Do you worry about passing on what you’ve inherited to, if you have kids, that generation? When I look at my two daughters, I’m like, “I want to be able to do all this stuff for them.”

SJ: That’s a really good question. If I’m doing this work in the right way, it will be clear to my kids and my partner, my family, that by moving this money into communities, it actually makes us more safe and more secure. I think of it as a trust fall into the movement.

With the World Economic Forum kicking off in Davos, Switzerland -- where the super-rich are already decrying Alexandria Ocasio-Cortez's massively popular 70% tax-rate on earning over $10,000,000 -- it's a great time to revisit Anand Giridharadas's must-read 2018 book Winners Take All: The Elite Charade of Changing the World, in which the former McKinsey consultant […]

Before Chris Anderson bought it in 2001, the TED conference was like a hip indie band only the in-crowd knew about. It was cool, small, had incredible buzz, and always sold out its small-ish venue. An unabashedly for-profit jam, TED had never posted a video online (it was too early for that), and happened once […]