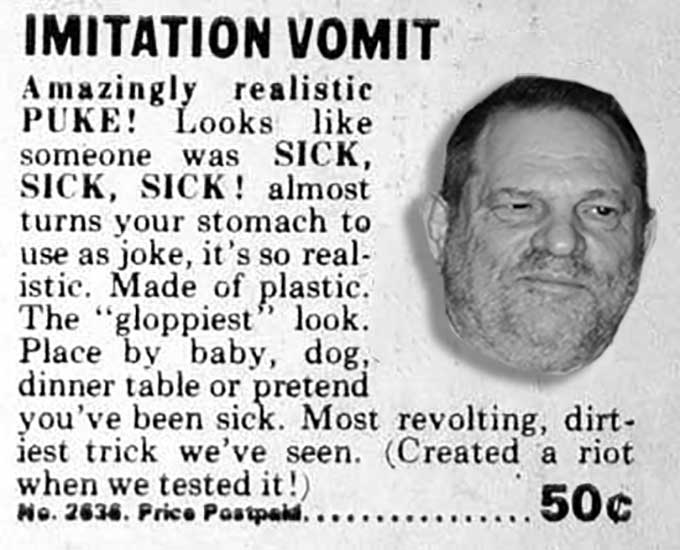 Hey all, I know I’m late to the conversation here. I don’t usually use twitter but it seems like that’s where a lot of this conversation is happening. Last night I confronted Harvey Weinstein in a bar along with a number of other artists. Heres the thread (1/?) #HarveyWeinstein pic.twitter.com/L8Oee5hAO7

She was escorted out of the bar.

And if you can stomach it, here's a photo of Weinstein flanked by two members of his entourage:

3. Does anyone know who these two women are sitting next to Harvey Weinstein? pic.twitter.com/e1U2McB6ix

The alleged rapist's spokesperson (how would you like to have that job?) issued the following statement:

Harvey Weinstein was out with friends enjoying the music and trying to find some solace in his life that has been turned upside down. This scene was uncalled for, downright rude, and an example of how due process today is being squashed by the public, trying to take it away in the courtroom too.

Downtime Bar issued a statement on  Facebook (which has been deleted):

A company called Actors Hour rented our bar for a private event, with a guest list all their own. Shortly into the evening, one guest began heckling another, causing a disturbance to everyone in attendance. After several requests to stop were ignored, we kindly asked the heckler to leave," the venue explained in its post.

Please know that our goal at Downtime is to create an environment where everyone feels welcome. We respect the privacy of our patrons and event partners, and want to ensure that all guests are treated equally, with the same service and respect. In keeping with this goal, we made a decision that would allow the evening to continue as planned.

While I was not prepared to handle a situation with a member of public who is awaiting criminal trial, I did not consider the underlying implications of Mr. Weinstein’s presence and was naively overwhelmed by the entire situation that unfolded. I want to sincerely apologize to any women who were re-traumatized this week at Actors Hour. I am deeply saddened that his presence was not only a trigger point for some attendees, but that some women ultimately felt unsafe, when a safe environment is what I set out to create for the acting community.