Check out these clear products from Theodore Gray's new book, How Things Work 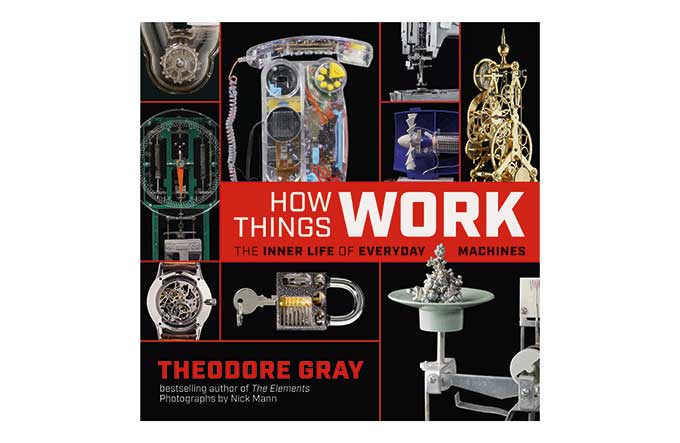 Theodore Gray, the co-creator of Mathematica, has written a number of beautifully photographed books that I love: The Elements: A Visual Exploration of Every Known Atom in the Universe, Molecules: The Elements and the Architecture of Everything, and Reactions: An Illustrated Exploration of Elements, Molecules, and Change in the Universe. I give all of them my highest recommendation.

Gray has a new book out called How Things Work: The Inner Life of Everyday Machines and it's another masterpiece. The publisher gave me permission to run a few sample pages from the chapter on "Clear Things," products that are transparent (often because they were made for prisoners and the prisons don't want prisoners hiding things inside opaque cases.

When I was young I saw for the first time a picture of a telephone with a transparent case. You could look inside and see all the electronic components that made it work! My first thought was “wow, that is so cool,” followed by “I want one.” But then I got worried.

A clear telephone seemed obviously superior to every other possible telephone, so why weren’t all telephones made with clear cases? Who could possibly want a phone that hid all the good stuff inside a pointlessly opaque case? I knew it couldn’t cost more to use clear plastic rather than colored plastic. Did the people who made telephones just not realize that they could use clear plastic? Could people smart enough to make a whole telephone really be that dumb? It was at this moment that I realized, with a sense of loss, that maybe not everyone wanted to see inside their telephones. Maybe a lot of people cared more about the color of the case than about how the parts fit together inside it. I’m still sad about this.

I never did get a clear telephone as a kid, and now that I have one, it’s too late to use it: we haven’t had a landline phone connection at my house for years.

Writing a book about how things work is a great excuse to be able to collect a tremendous number of things with clear cases, which are useful for understanding how products are put together. They are also every bit as fun and cool as I imagined they would be. What I did not imagine is that many of them exist only because of prisons.

Traditional industrial-scale rope-making is all kinds of neat

When it comes to making rope, there’s no school like the old school. I love that, despite the advances made in the areas of fabrication and industrial automation, there are still products made using methods that haven’t changed in a century. Some things, as this video from How it’s Made illustrates, are better off without […]