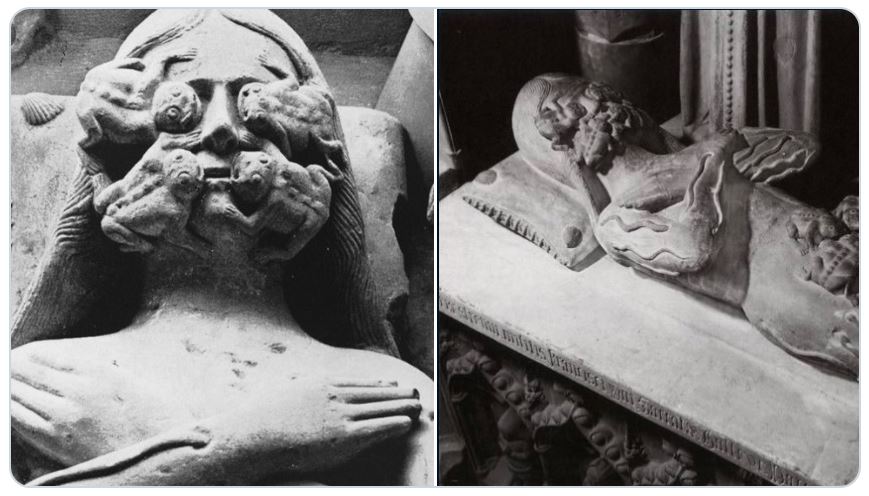 Has this made it into a Hellboy comic yet? The effigy of Francois I de la Sarra (died 1363), can be found in the Chapel of Sainte-Antoine at La Sarraz, Vaud, Switzerland:

The chapel, dedicated to Saint Antoine, founded by Francis I of La Sarraz, was built by his son Aymon III between 1360 and 1372 as the first urban chapel. It is classified as a historical monument. It is a Protestant temple located on the territory of the Vaud municipality of La Sarraz.

It's not just frogs covering his body:

TFW you’re exhausted but vacation is only a few days away, so it’s all going to be OK. Here’s the extra creepy cadaver tomb of François de la Sarra (d.1363), showing his body nibbled by frogs, snakes, and worms ? ? ? #MondayMotivaton #summerbodies #medievaltwitter pic.twitter.com/sGOoBz6QhD

Effigy of Francois I de la Sarra (died 1363), Chapel of Sainte-Antoine at La Sarraz, Vaud, Switzerland. Had to hop over the fence to get a better look at this famous, out-of-the-way thing while on my way to Fribourg... #toads, #snakes, and #worms devour … https://t.co/hsTsLNJtRc pic.twitter.com/jD6Rz00kWu