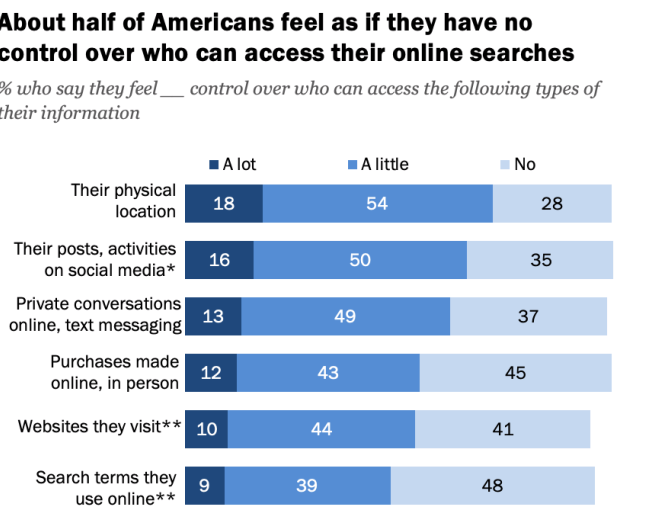 Among Black people, the stats are (justifiably) grimmer: 73% of Black users worry about law-enforcement abuse of their data (it's only 56% of white Americans).

This may seem like bad news, but there's a silver lining. For decades, privacy activists have struggled to convince people to care about online surveillance -- thanks to inaction, people can't help but care, because they are being harmed in ways large and small on the regular.

This is the Peak Indifference moment, when denialism threatens to slide into nihilism ("OK, OK, I believe your story about declining rhino populations, but since there's only one left, why don't we find out what he tastes like?"). It's the moment when an activist's job changes from convincing people that there's a problem to convincing them that it's not too late to do something about it.

It means that there is a public appetite for change, and that lawmakers and regulators who propose meaningful privacy rules will find support for it -- and that businesses that offer privacy-friendly tools will find markets for them.

What’s next? There are some moves in the right direction. Google’s deal with Ascension has already sparked a federal probe. The California attorney general has been investigating Facebook for privacy violations. Activists are working to stop facial recognition from being used by both the public and private sectors. Some Democrats have introduced legislation that would give the Federal Trade Commission power to fine tech companies up to 4% of their annual revenue for privacy violations, which is a much bigger amount than current fines. Others have proposed a new federal agency to deal with digital privacy. So there’s more attention being paid to privacy than ever before. Still, it’s true that the average consumer can’t do a lot about personal data being collected, and it’ll be a while before that really changes.