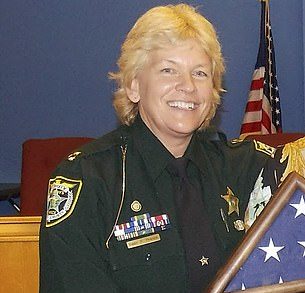 The Miami Herald reports that a high-ranking officer in the Monroe County Sheriff's department instructed another officer to act like a "white supremacist" and a "Neo-Nazi cop" when detaining a black suspect. The officer, named as Capt. Penny Phelps, was recorded and "relieved of her command."

Phelps was removed from her post as head of the major crimes and narcotics units on Wednesday, according to paperwork released to the Miami Herald Saturday. Ramsay said it is too early in the investigation to comment on whether Phelps could lose her job.

“We have to have all the facts first,” he said Saturday, adding Phelps has been with the sheriff’s office about 18 years and makes about $110,000 a year.

Reached by phone Saturday, Phelps said policy prohibits her from talking about the case.

The Herald has the tapes.

The best part of this video showing cops tangling with knife-wielding maniacs is it’s at least three layers of cultural recapitulation deep: the posed 80s-era “original”, the implicitly late-20th-century comic milieux implied by its ironic presentation, the 2000s upload, and its recurring virality in 2020. Thanks to Everything is Terrible, of course. Previously: Chinese police […]

Granted anonymity somewhere along the line from shutter to public exposure, cadets in the Division of Corrections and Rehabilitation’s basic training program offer the camera a Nazi salute in a photo that emerged earlier this month. Two academy trainers and one cadet have already lost their jobs; the state’s governer says he wants the whole […]