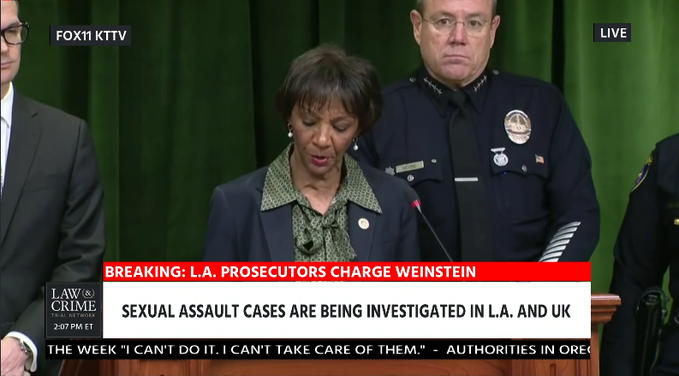 Just hours after his trial for rape kicked off in New York, on the other side of the country LA Country District Attorney Jackie Lacey said Weinstein has been charged in Los Angeles with raping one woman and sexually assaulting another over a two-day period in 2013.

He has been charged with one count of forcible rape, forcible oral copulation, sexual penetration by use of force, and sexual battery by restraint.

“We believe the evidence will show that the defendant used his power and influence to gain access to his victims and then commit violent crimes against them,” Lacey said. “I want to commend the victims who have come forward and bravely recounted what happened to them. It is my hope that all victims of sexual violence find strength and healing as they move forward.”

Harvey Weinstein has been indicted on new sex crime charges in Los Angeles, just as his trial on separate rape and sexual assault charges in New York was poised to get underway, prosecutors announced Monday. https://t.co/i4CvAcMhZF

Here's everything we know ahead of this 11 a.m. presser -- Harvey Weinstein charged with four counts of sexual assault in Los Angeles, tied to 2013 assaults. https://t.co/bwLrqWjKZr

JUST IN: Harvey Weinstein has been indicted on new sex crime charges in Los Angeles, on the same day his trial in New York is set to be begin https://t.co/pEBuakPaW4 pic.twitter.com/jQ0oh3Jv3D