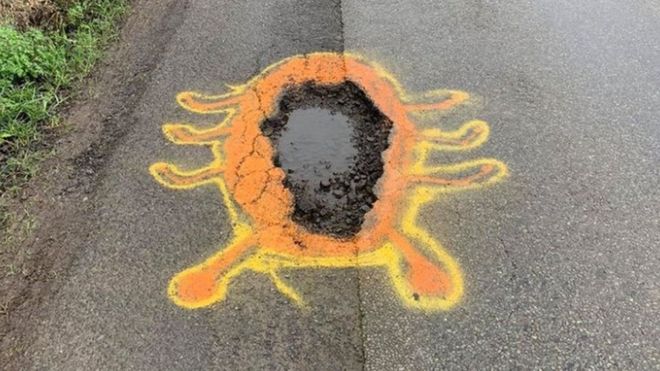 A British woman has defiantly rejected criticism from Lincolnshire County Council, which has asked her to stop spraying paint bugs around potholes that it has failed to patch. Locals have nicknamed her "Bugsy" in honor of the crude but colorful roadway creations.

Lincolnshire County Council said repair of the hole would be delayed due to the paint having to be removed.

"On Friday night I was going along and hit a pothole which burst my tyre," Ms Holland said. "I took it to the tyre place on Saturday and £53 later I decided I'd had enough. I went and bought some spray paint and I made it into a bug. If I can save people from getting a bill like I did then it's worth it."

Sounds to me like Ms. Holland should be equipped with some sidewalk spray chalk [Amazon]: highlights the danger and puts a fire under the council, but washes away with water.