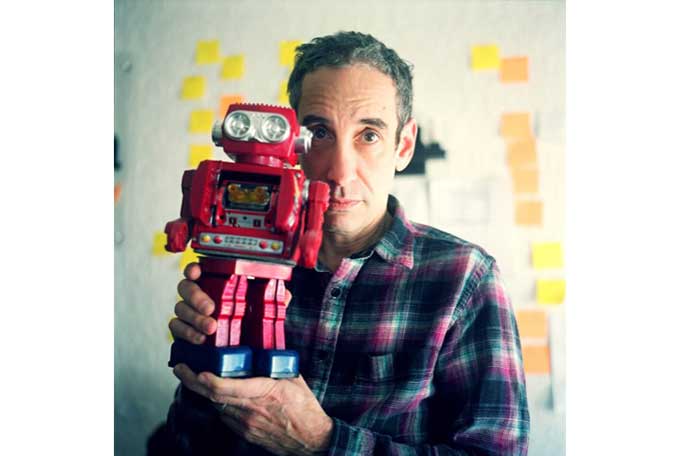 Douglas Rushkoff is one my oldest and dearest friends. He's also one of the sharpest media theorists and cultural critics I know. It's always a thrill to have a conversation with him because he makes me question my opinions and I alway end up with a changed brain. So it was great fun to have him on the Cool Tool podcast.

Douglas is named one of the "world's ten most influential intellectuals by MIT. He's an author and documentarian who studies human autonomy in a digital age. His twenty books include the just-published Team Human, based on his podcast, as well as the bestsellers Present Shock, Throwing Rocks at the Google Bus, Program or Be Programmed, Life Inc., and Media Virus. He also made the PBS FRONTLINE documentaries, Generation Like, The Persuaders, and The Merchants of Cool. He's a professor of Media Theory and Digital Economics at Queens College, a columnist for Medium, and his novels and comics, Ecstasy Club, A.D.D., and Aleister & Adolf are all being developed for the screen. You can find him on Twitter @rushkoff and Youtube.

Written language
Written language is definitely a tool. It's a medium. It's an environment. There's all these ways to think about it, but I love thinking about words as a tool. Because particularly, when I'm mad about something or I feel like there's something that people don't get, once I can put words around it, once I can articulate what's happening, what people are feeling, or the dysfunction, or the paradox, I feel like it empowers me and so many other people to then go do something about it. Written language is what allowed us to record history for the first time, which is when we started to really think about the past. It's when history was born. Written language is what allowed us to write contracts into the future. So I see written language, text, as the thing that really invented time and invented progress, and that invented a future and a history. And to this day, it feels not like going back but like retrieving a really core human ability, when we write something down.

C. Crane CC Pocket AM FM and NOAA Weather Radio
My favorite tools were my dad's old transistor radios. This is the modern equivalent. It may be the very best application of truly digital technology for me, in that it has turned the tuning dial into discrete numbers. It has other tech to lock in the stations, as well. I was pretty skilled at tuning in a station, even with a crude dial -- and did take some pride in my ability to tune slightly off a signal in order to increase treble and voice clarity. But this really does the job, and is small enough to put under my pillow so I can listen to conspiracy and UFO radio shows late at night.

RODE NT-USB Microphone
I am generally not a fan of USB microphones, and really truly dislike the whole BLUE line of microphones. I use a real microphone and a mixer/digital interface. But at home, when I have to record a monologue, I plug this desktop mic into my laptop and get sound that I think I may actually like better than my Shure SM7B. It could just be that my voice sounds better with a worse microphone. But it's really good at ignoring background noise (like the clothes dryer in the next room). Plug and play, in the real way.

Fairphone 3
They're mostly still in Europe, but you can use one with 3G in the US. It's a phone that uses as few slaves as possible. It's just an android phone, with a body that's a case. But it's also a social art project. I only use it sometimes, because I'm still stuck in the Apple universe. But once my iPhone 6 dies completely, I will use it full time. The main thing I like is what it makes me think and talk about: the possibility for ethical technology. It's not there, yet. But it points the way.

Dash Mini Waffle Maker
This is a tiny waffle iron that makes great waffles, really simply. It's a great little thing. You just plug it in, you pour in your waffle mix, and there's a little light that sort of indicates when it's at proper temperature. And I use the light to sort of figure out when my waffle is done as well. It's all stick-free and it's just perfect when you find one of these things that's a perfect little thing for what you do. And we're better at small waffles than big. I'm a firm believer in silver-dollar pancakes and tiny waffles, that the smaller the thing is, I don't know if this is geometrically true, but it seems as if there's more surface area than per ounce of food. And I like the surface. I like the skin of the waffle or the sides of the pancake more than the insides. So, we make mini things. We make mini omelets and mini waffles and mini pancakes, and we can control our dosing better that way too.

Team Human ($16, Hardback)
Team Human is a manifesto -- a fiery distillation of preeminent digital theorist Douglas Rushkoff's most urgent thoughts on civilization and human nature. In one hundred lean and incisive statements, he argues that we are essentially social creatures, and that we achieve our greatest aspirations when we work together -- not as individuals. Yet today society is threatened by a vast antihuman infrastructure that undermines our ability to connect. Money, once a means of exchange, is now a means of exploitation; education, conceived as way to elevate the working class, has become another assembly line; and the internet has only further divided us into increasingly atomized and radicalized groups. Team Human delivers a call to arms. If we are to resist and survive these destructive forces, we must recognize that being human is a team sport. In Rushkoff's own words: "Being social may be the whole point." Harnessing wide-ranging research on human evolution, biology, and psychology, Rushkoff shows that when we work together we realize greater happiness, productivity, and peace. If we can find the others who understand this fundamental truth and reassert our humanity -- together -- we can make the world a better place to be human.

I prefer Gum Soft-Picks to flossing

Gum Soft-Picks do a better job than toothpicks or floss for cleaning food and plaque from between my teeth. For me, it’s just much more convenient than using dental floss. The rubbery green brush pushes out all the gunk without hurting.  You can buy them in packs of 50, 100, 150, or 300.

This notebook has pages proportioned for phone and computer displays

BetterBook is a notebook/sketchbook designed to match widescreen displays. The idea is you can take photos of it on your phone and it will do a better job of fitting on a screen. It comes in one of three types of paper — dotted grid, standard grid, or blank. The notebook had a successful run […]