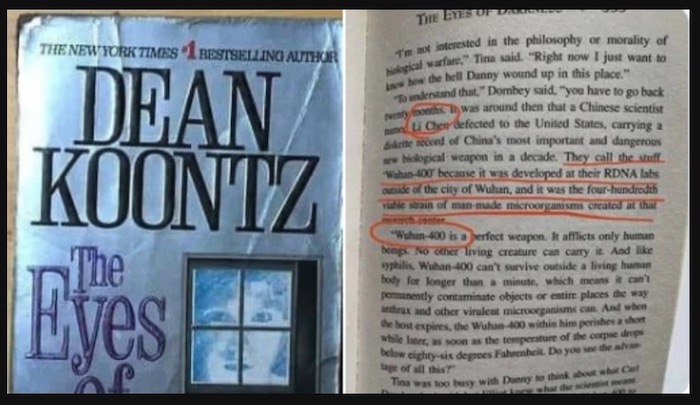 Dean Koontz's The Eyes of Darkness is a 1981 thriller that mentions germ warfare lab in Wuhan that develops a virus called Wuhan-400, which is then accidentally leaked.

It's an interesting coincidence, but as Hong Kong crime author Chan Ho-kei, that's all it is. He told The South China Morning Post "that this kind of 'fiction-prophecy' is not uncommon.:

“If you look really hard, I bet you can spot prophecies for almost all events. It makes me think about the ‘infinite monkey’ theorem,” he says, referring to the theory that a monkey hitting keys at random on a typewriter keyboard for an infinite amount of time will almost surely type any given text.

“The probability is low, but not impossible.”

It's a strange world we live in.#coronavirus #COVID19 #Wuhan pic.twitter.com/WkjbK4zGaW