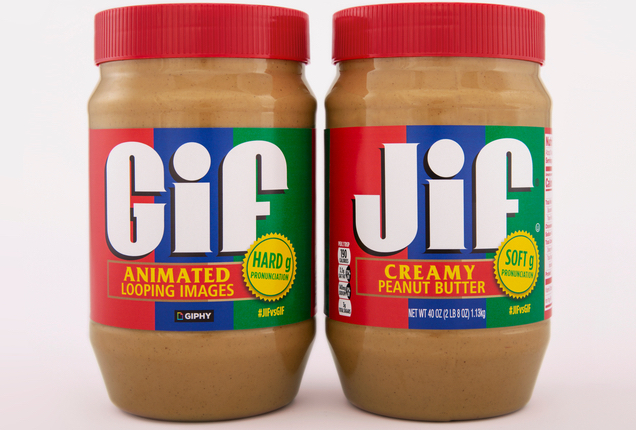 How do you pronounce GIF? Many people use a hard G because GIF stands for Graphics Interchange Format, but others (myself included) say "jif" because it's more mellifluous. The makers of Jif Peanut Butter have taken a stand by issuing a limited edition run of "Hard g"  Gif peanut butter jars, which will go on sale on March 1.

Jif is partnering with GIPHY, a GIF search engine, to "put a lid on this decade-long debate": Both GIF and the peanut butter are pronounced "Jif."

The limited edition jars are on sale for $10 on Amazon, just in time to celebrate National Peanut Butter Lover's Day on March 1. (The typical price of the same-sized jar for regular peanut butter costs roughly half of that.)

All of this does nothing to explain why Jif was once called Jiffy, before we were sent into this glitchy alternate universe.

Having difficulties using a butter knife or rubber spatula to get the last ounce of peanut butter out of the jar? Or maybe you’re sick of having your too-soft bread being ripped apart by peanut butter (wait, what?). Not to worry first-world citizens, inventor Andy Scherer of Burbank, California has got you covered. His Peanut […]

A dozen prisoners at Jasper, Alabama’s Walker County Jail escaped on Sunday and one is still at large. One of them used peanut butter to change the number above his cell door and then called for the guard, a new employee, to open it. The number the prisoner changed it to was actually the door […]