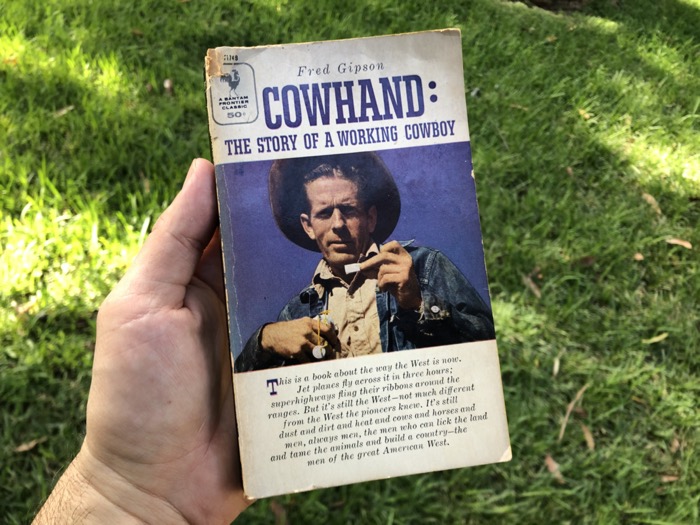 I bought this used paperback copy of Cowhand: The Story of a Working Cowboy, by Fred Gipson, many years ago at a used bookstore. I finally got around to reading it. Here is my book report.

The author was born in 1908 on a farm in Texas. He went to the University of Texas at Austin and became a journalist. Gipson's best known for his novel Ole Yeller (1956) which won a Newbery prize and was adapted to a Disney movie of the same name. A few years before Ole Yeller, he wrote Cowhand - The Story of a Working Cowboy and it focuses on the life of his friend Ed "Fat" Alford, born in 1901 to rent-farming parents in Oklahoma. Here's how Gipson describes his friend Fat:

By Hollywood standards, Fat is a far cry from being a typical cowhand. He never shot a man in his life. He never chased a rustler across the Rio Grande. He never rescued a beautiful girl from ruthless bandits and rode off into the sunset with his arm about her waist. He never carved a cattle empire out of a "howling wilderness."

The truth is, he doesn't even look like a cowboy. He's too squat and heavy; he's too short-legged and bullnecked. He's so potbellied and yet so hipless that some consider it a minor miracle that his pants aren't forever slipping down to hang around his hocks. It is very doubtful that he could hire on as a Hollywood extra in the quickest of quickie Westerns.

Even though Fat's life has none of the violent glamour of a Hollywood cowboy, it's full of fascinating stories about the daily life of a cattle worker 90 years ago. Cowhand is divided into 27 chronologically ordered chapters. Each chapter recounts a memorable incident, like the time a teenaged Fat tried to rope a cow (when his boss, who told him not to, wasn't around) and the rope snapped and hit his face. His face bled so much he was covered in blood. Fat spent the rest of the day trying to hide his injury from the other cowboys. When they noticed and asked him what had happened, Fat made up a story about pulling up a bush for firewood, which no one believed, especially since the broken end of the rope was still tied around the cow.

Gipson's writing is colorful and clever but never ostentatious. It's highly readable. His style is not easy to pull off, but he succeeds where other authors who might attempt a similar vernacular style would end up with garbage. Highly recommended.

These days, television networks air completely fictitious productions as non-fiction documentaries on subjects such as the extinct Megalodon shark or mermaids.

The New York Times Magazine’s 6th Floor Blog interviewed me about the books I’m reading now (including a climate scientist’s account of dealing with evidence and uncertainty in the treatment of cancer), the science books I love (where you’ll learn why it’s impossible to remove the risk from risky technologies), and the books I generally […]