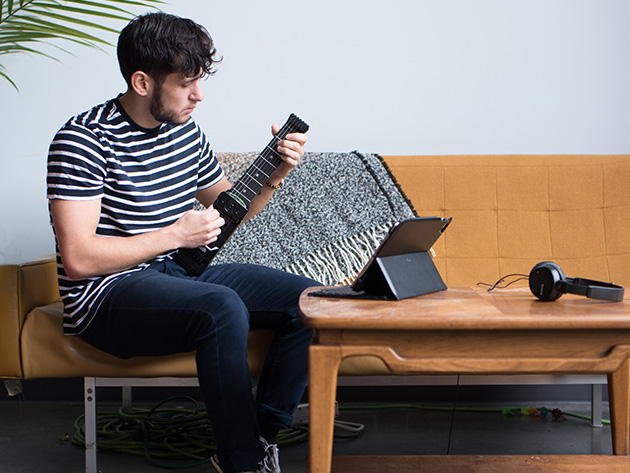 With so much chaos happening in the world at the moment, this may not seem like the right time to start a new hobby.

However, we would argue that now is actually the perfect time to dive into something new. Things are changing — and while there’s plenty happening that’s worthy of genuine concern, there’s also an opportunity here to change and grow personally.

So if your dream has always been to pick up an ax and shred like you’re Eddie Van Halen, the Jamstik 7 Guitar Trainer can help make it happen, even under the present conditions.

Lightweight, wireless, and portable, the Jamstik 7 looks like one of those Guitar Hero-style push-button guitar toys, but it’s anything but. It’s actually a home-based, innovative guitar training system that bypasses the hassles of in-person guitar lessons and gets right to the heart of your desire: playing music.

Once you’ve plugged the Jamstik into your iPhone, iPad, Mac or Google Chrome device, all your sound is filtered through your device as you tackle lessons through Jamstik-enabled software.

The Jamstik features all-new patented FretTouch finger sensing technology and Infrasense optical string pickups. That may all sound like tech-speak, but while you’re actually playing on real, high-quality custom guitar nickel steel strings from D'Addario, the Jamstik actually senses when and how hard your fingers are breaking light beams.

A capacitive touch PCB sits right below the fretboard, catching your finger positioning, then showing your fingers on your device screen in real-time as you’re playing so you’ll always know if you’re hitting the right note.

And unlike other digital systems, this method is also touch-sensitive, actually gauging how you’re playing and translating that into how that string movement would sound in real life.

At just 18 inches, Jamstik is super portable, so you can practice virtually anywhere. Of course, with a pair of headphones, it’s also tailored so you can play and improve as you’re sitting on your couch, even when you’re surrounded by others.

Jamstik 7 is also compatible with loads of music learning and music creation software, so even experienced players can fold the Jamstik into their home music-making setup.