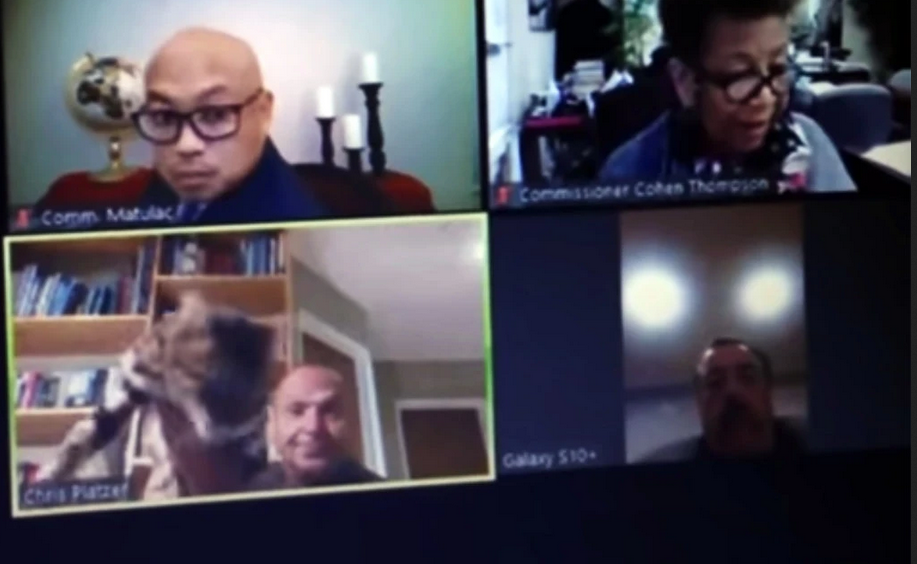 He lifted the cat up to the camera, then with two hands, throwing the cat in the air off-screen.

He was seen drinking beer, and allegedly called staff "bitches."

He's in the doghouse now.

“This type of behavior [throwing a cat during a zoom meeting] does not model the core values of the city of Vallejo.”

Chris Platzer said in an email to the Vallejo Times-Herald on Saturday that he has resigned from the Vallejo Planning Commission, effectively immediately — days before the Vallejo City Council was set to consider a resolution removing him from the seven-person commission.
Platzer

Vallejo spokesperson Christina Lee said the city was still attempting to confirm if Platzer had officially resigned from the commission. Platzer couldn’t be reached for comment via phone on Saturday.

Platzer was seen drinking a beer and throwing his cat through the air during a commission meeting held via teleconference on April 20.

He was also heard by city staff making derogatory remarks after the online meeting had ended.

“I’m going to call bull— on you little b—s,” according to the original commission meeting video released by the city on Saturday.

In his email to this newspaper, Platzer apologized for his actions.

“I did not conduct myself in the Zoom meeting in a manner befitting of a planning commissioner and apologize for any harm I may have inflicted,” Platzer wrote. “I serve at the pleasure of the council and no longer have that trust and backing. I extend my gratitude to those who have supported me during my tenure. I have always felt that serving Vallejo in a voluntary position is honorable because Vallejo is worth serving. We are all living in uncertain times and I certainly, like many of you, am adjusting to a new normalcy.”

More at the Vallejo Times-Herald.

The New York Times, AP, and Buzzfeed also have stories out now.

Watch a Vallejo planning commissioner toss a cat, grab what appears to be a bear and slur words, and call everything bullsh-- during a Zoom meeting of the Planning Commission: https://t.co/7UvGAMYQ18