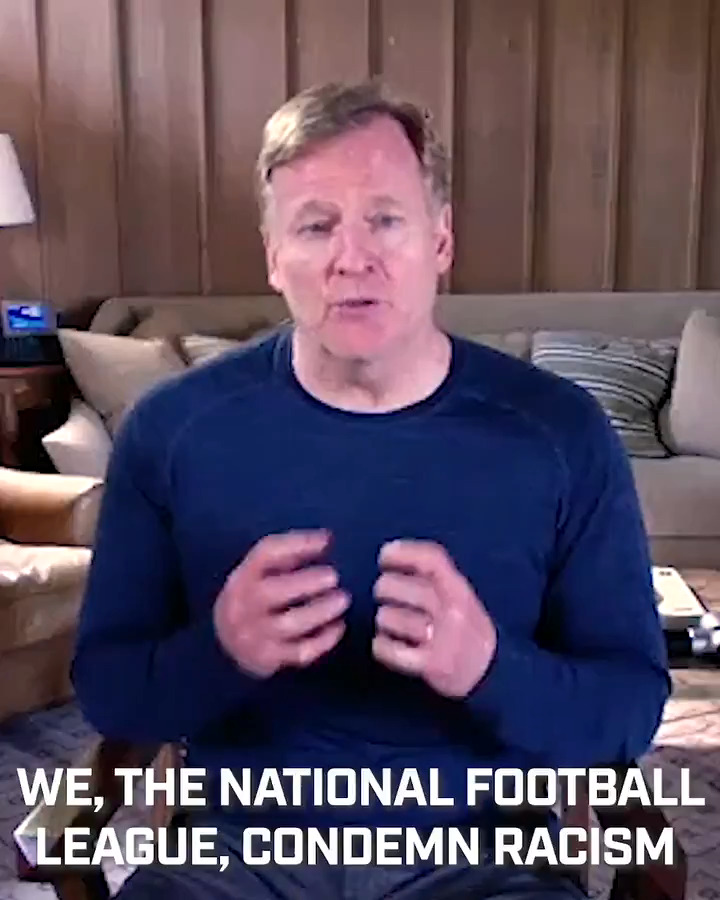 In a major reversal, NFL commissioner Roger Goodell on Friday says the NFL was wrong to prohibit football players from peacefully protesting police brutality against Black people by kneeling as the national anthem was played pre-game.

The American football quarterback and activist who suffered professional retaliation for leading those peaceful protests, Colin Kaepernick, isn't mentioned once in the video.

We, the NFL, condemn racism and the systematic oppression of Black People. We, the NFL, admit we were wrong for not listening to NFL players earlier and encourage all to speak out and peacefully protest. We, the NFL, believe Black Lives Matter. #InspireChange

Watch the video statement below.

We, the NFL, condemn racism and the systematic oppression of Black People. We, the NFL, admit we were wrong for not listening to NFL players earlier and encourage all to speak out and peacefully protest. We, the NFL, believe Black Lives Matter. #InspireChange pic.twitter.com/ENWQP8A0sv

NFL Commissioner Roger Goodell says the league should have listened to players earlier about racism concerns in a video response to calls on the league to condemn racism https://t.co/bvkpi8dgfS

But he still didn’t mention Kaepernick by name. Maybe that’ll be next Friday! https://t.co/cOUhJtJJJ5

Did he start this movement? Yes.

Was he blackballed from the league as a result? Yes.

Was he completely right about what he was protesting against? Yes.

Should Roger Goodell say his name and apologize to him directly? Yes. https://t.co/fn0HI2Hrri

Roger Goodell's video is a direct reply to this incredibly powerful statement from some of the NFL's top players. Four years after Colin Kaepernick took a knee against injustice, the players are finally being heard. Now we'll see if the NFL and its teams actually change. pic.twitter.com/Fzee02bScZ

This was long overdue. But Roger Goodell finally got it right and stopped trying to appease the shortsighted, anti-kneeling crowd. Make no mistake, though: The real credit here goes to the players — including Jamal Adams and Saquon Barkley — who told Goodell enough was enough. https://t.co/HiMqZgWwGP

Seriously, this statement from Roger Goodell is “acknowledging” that they were wrong in not listening to player protests, but the person who led the protests, was blackballed and lost years of playing time during his prime is not mentioned by name oncehttps://t.co/JlCbzpWmOF