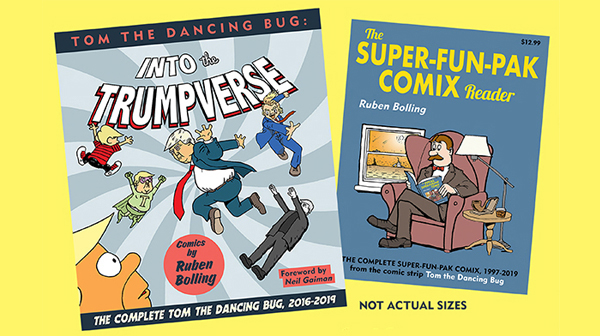 Boing Boing’s own Ruben Bolling has a book coming out this summer, Tom the Dancing Bug: Into the Trumpverse, published by Clover Press.

It compiles every Tom the Dancing Bug comic from 2016-2019, covering, among other things, the rise (and fall? or continued rise?) of the Trump phenomenon.

During that time, in the course of his cartoonist satirist duties, Ruben has depicted alternate-reality versions of Trump, such as a James Bond super-spy, Homer Simpson, Calvin and Hobbes, Frankenstein (actually, Frankenstein’s monster), and countless others.

Ruben says, “I wanted these collected in book form so that there is a blueprint for the next time America comes under the existential threat of a deranged, racist, authoritarian con man. Such as November, 2020.”

Super-Fun-Pak Comix are those tiny daily-style comics Ruben anachronistically uses to simulate a surreal version of that relic of a bygone era, the newspaper comics page.

Ruben says that because of the economic fallout of the Covid crisis, these books are not going to be sold in bookstores. Instead, you can only order them directly, and for now only through June 30.