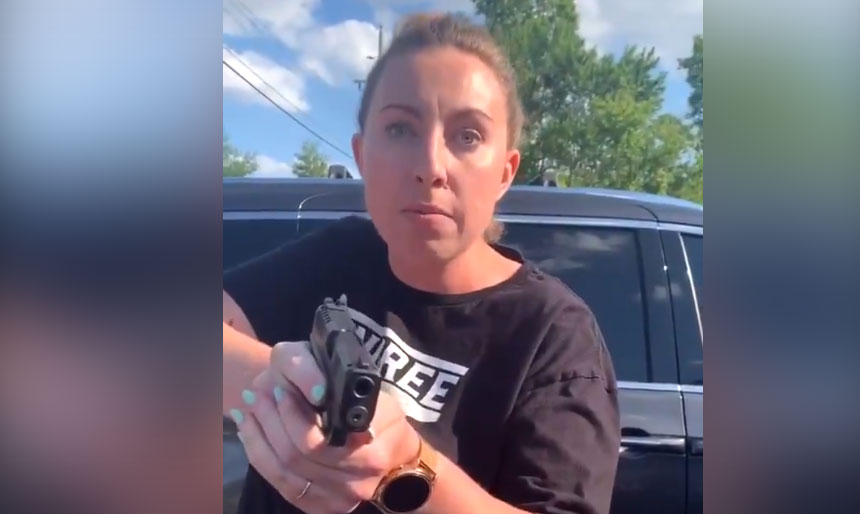 A woman was arrested yesterday after pulling a gun on another woman and her daughter outside a Detroit-area Chipotle. (Update: she was later charged with felony assault)

The circumstances are unclear and in dispute, but mostly on film. It appears the child, who is black, and the gun owner, who is white, bumped into one another outside the restaurant in Lake Orion, Michigan, and began arguing. By the time the filming begins, mom's demanding an apology from the woman. The gun owner, calm at this point, refuses to do so and demands they step aside to let her get in her car. They do and she gets in on the passenger side, and everyone begins debating racism through the car window, with the mother and the daughter angrily accusing her of "ignorance" while the gun owner insists that "white people aren't racist".

It appears the dispute is ending, but as the vehicle begins backing out — the footage is shaky and incompete beause the person filming has begun to walk away — someone behind the vehicle shouts "you're going to hit me?" and slaps the vehicle's rear window. It isn't clear if the person was about to be bumped inadvertantly by the driver or was deliberately obstructing the vehicle.

In any case, the gun owner exits the vehicle, draws the weapon, and begins screaming and threatening.

Two clips are in circulation. The longer one (below) shows the full dispute, mostly at a distance. The shorter one (above) was filmed by the person at the firearm's business end. It does not begin until after the gun was drawn.

According to a family member, the woman was released without charge, but her guns were confiscated. The Sheriff's office, according to the Detroit News, hasn't named her but will host a presser later today to discuss the incident.

Update!!!!! They were let go !!! The police just took the guns away !!! Ridiculous!!!! They said they couldn’t arrest her because my niece mother hit there car (with her hand ) to stop them from hitting my niece!!! Justice needs to be served! This is white privilege 🤦🏽‍♀️