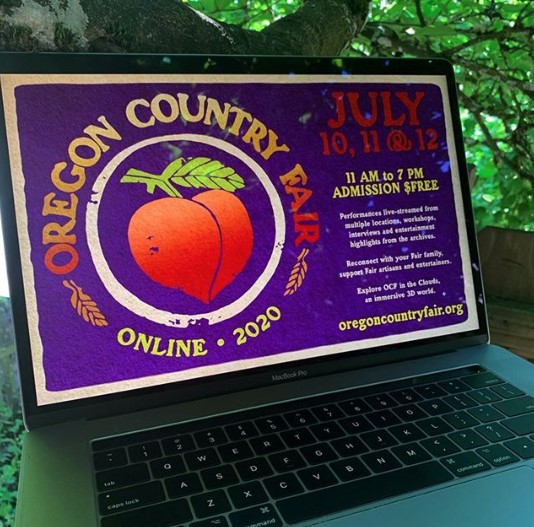 The legendary Oregon Country Fair got COVID-cancelled but that's not stopping them from hosting their annual three-day music and art festival online. This weekend (July 10-12) turn on/tune in for their first-ever virtual fair — they're calling it an "experi-meant." Admission is free but it's not free to produce, so drop them a few bucks.

We’ve prepared quite a few events to help ease the loss of the real world 2020 Fair. Just like the physical event, there is a lot going on and several different ways to engage. Music, Workshops, Spoken Word performances, and more! With 13 stages, and something like 100 acts on the schedule, there is a lot happening. Rose City Circus is even joining by performing onstage from the Alberta Rose Theater in Portland OR and live streaming their performance straight to you!

Our very own KOCF 92.7 will host the virtual Hoarse Chorale stage – all streaming video live; some from a local empty venue, and some from up and down the west coast. KOCF will also replay the performances over the radio beginning at 9pm each evening on “Live From the Oregon Country Fair”. You can stream KOCF 92.7 HERE.