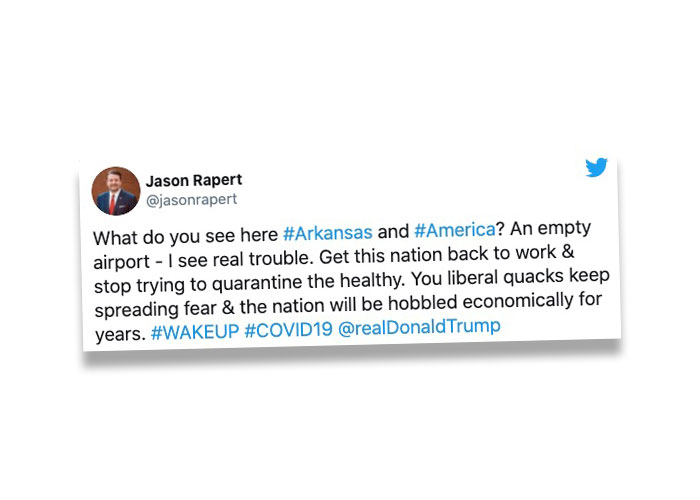 Arkansas GOP state senator Jason Rapert previously tweeted about "liberal quacks" who "keep spreading fear" and who are "trying to quarantine the healthy."

What do you see here #Arkansas and #America? An empty airport – I see real trouble. Get this nation back to work & stop trying to quarantine the healthy. You liberal quacks keep spreading fear & the nation will be hobbled economically for years. #WAKEUP #COVID19 @realDonaldTrump pic.twitter.com/QqeyeSToOO

The infamously anti-gay senator is now posting from the hospital, after coming down with Coronavirus disease.

The Georgia high school that suspended two students for posting a video of the school's crowded halls has shut down due to coronavirus infections. Nine people at North Paulding High School (6 students, 3 staff members) have tested positive, and attended school "for at least some time" last week, according to Principal Gabe Carmona. Now […]

Trump and Junior are urging their social media followers to heed the Covid-19 advice of Dr. Stella Immanuel, a Houston pediatrician who has determined that many diseases are caused by sex with demons and/or alien DNA. The Daily Beast reported that Dr. Immanuel "praises hydroxychloroquine and says that face masks aren't necessary to stop transmission of […]

Yesterday, The New York Times ran an article about how the GOP governor of Arizona's limited response to the pandemic resulted in a "leveling off" of Covid-19 deaths and cases: As the United States surpasses four million known coronavirus cases, far more than any other country, new outbreaks are sending thousands of seriously ill people […]