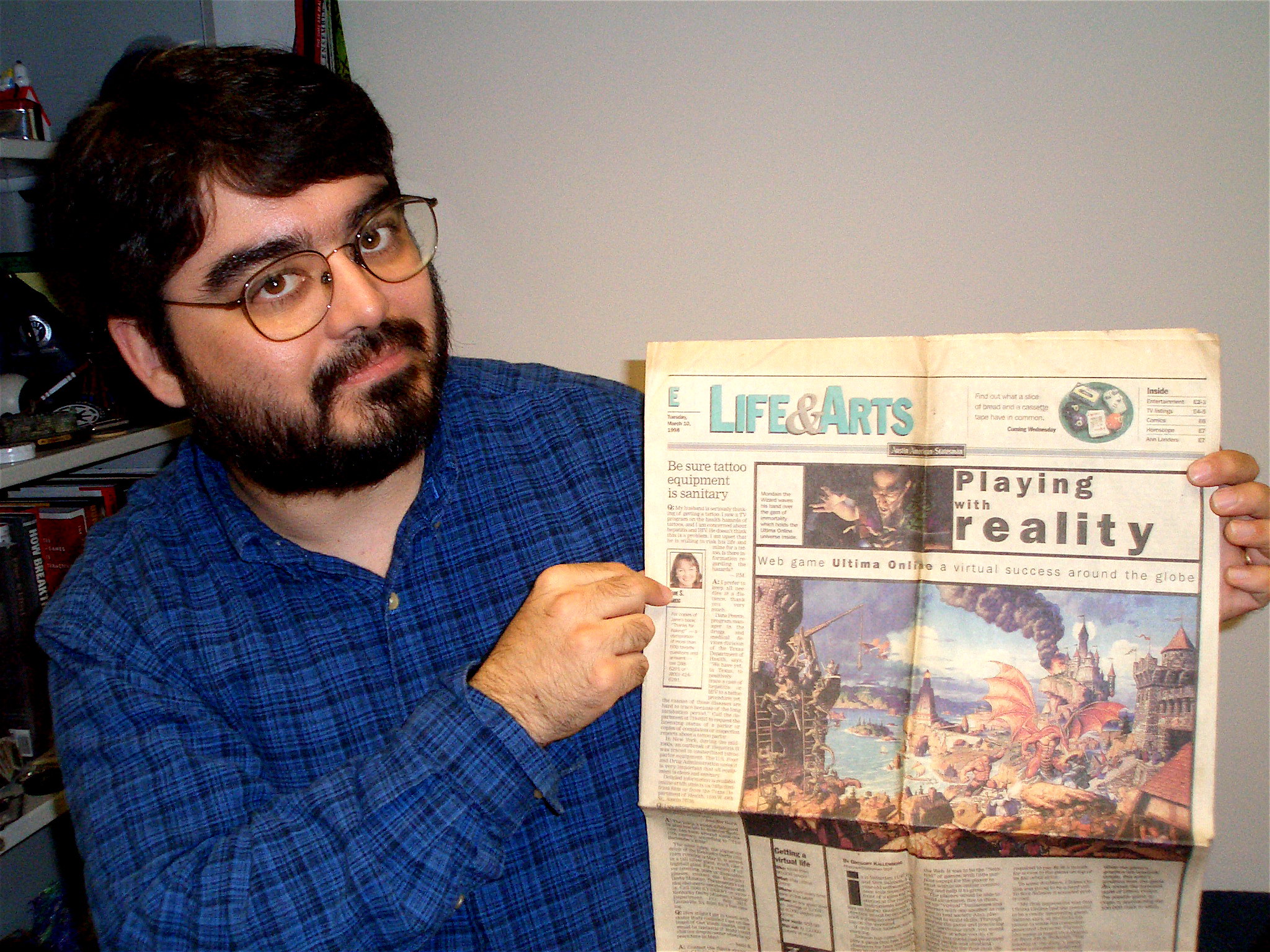 Raph Koster (previously) is a games design legend, the designer behind such classics as Ultima Online and Star Wars Galaxies, a consistently thoughtful and smart theorist of games, and the author of A Theory of Fun, the best book I've ever read about games and gaming. Read the rest 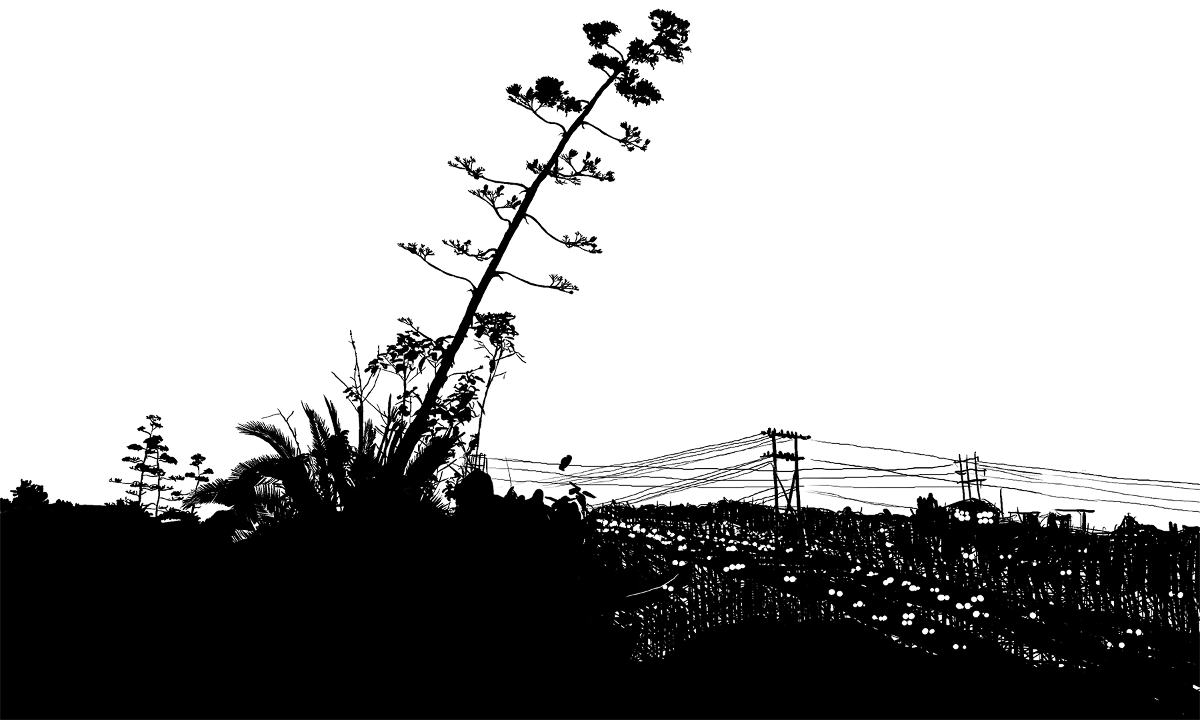 Game designer Raph Koster is a polymath. A legendary game-designer (Star Wars Galaxies, Ultima Online, etc), author of one of the seminal texts on game design (A Theory of Fun), visual artist, musician -- and poet.
Jay Allen / 8:00 am Wed, Dec 31, 2014

That tell-tale wedding of relentless hostility and ethical affectation is a peculiar youth subculture spilling out into the open web. Get ready for more of it.
Cory Doctorow / 2:54 pm Sun, Oct 19, 2014

Why (and how) games are art

I sat down for an interview with the LA Times's Hero Complex to talk about my book In Real Life (I'm touring it now: Chicago tomorrow, then Vancouver, Seattle, Portland, Palo Alto, San Francisco, Warsaw, London...), and found myself giving a pretty good account of why games are art, and how the art of games works: Read the rest

Raph "Theory of Fun" Koster has a wonderful, readable, theory-rich article that helps unpick the discussion about when a game is a clone of another game, when it's a skin, when it's a variant, and when it's a new game. Read the rest

As mentioned earlier, the new edition of A Theory of Fun For Game Design by Raph Koster ships today -- with updated text and color illustrations. It's an absolutely indispensable book about the phenomenon of fun, full of mind-blowing and very applicable insights into games, from a legendary designer (Koster led the design of Star Wars Galaxies and Ultima Online, among other accomplishments). Just as Understanding Comics is a fascinating read, even if you never plan on making a comic book, so will A Theory of Fun fascinate and inform everyone, not just games-makers. Read the rest

What is a game?

Back from the Games Developers' Conference in San Francisco, Raph Koster weighs in on the perennial debate about what makes a game, starting with his own classic formulation, "Playing a game is the act of solving statistically varied challenge situations presented by an opponent who may or may not be algorithmic within a framework that is a defined systemic model."

Some see this as a “fundamentalist” approach to the definition. But I use it precisely because it is inclusive. It admits of me turning a toy into a game by imposing my own challenge on it (such as a ball being a toy, but trying to catch it after bouncing it against the wall becoming a game with simple rules that I myself define). It admits of sports. It admits of those who turn interpersonal relationships, or the stock market, or anything else, into “a game.”

Basically, I see this whole issue as this Venn diagram. I group sports, boardgames, and yes, videogames under “game” because all of them are susceptible to being broken down and analyzed with game grammar. They all have rules. They all have an “opponent” that presents varied challenges to the player. They all have a feedback loop. They all present verbs to the player. They all present goals. The fact that some use real-world physics as the opponent, some use the human body, some use dice or boards, and some use a computer is not even relevant when you break down the game atoms. I can group these easily because I’ve dug into them so much that I know there is something there in common.

Raph Koster, who has many critical insights on game design, has a great new essay on his blog called "Making games more cheaply," which closes with this statement that applies to practically every form of digital media extant, and may just be the secret to success in the 21st century:

Embrace prototyping. Make your game playable and fun before you have any art. Stop writing big design docs.

Big design docs are useless. There, I said it. Trying to build a game off of one is like trying to recreate a movie from the director’s commentary track. They are largely castles in the air. The only time that big design docs serve a real purpose is when they are describing static content.

Embracing prototyping is a huge mental barrier for people. But it is what gets you to that long-lived self-refreshing systemic game design. You can prototype almost any game with some dice and some index cards. And plenty of ideas that sound good on paper turn out to suck when tried out for real.

Prototypes properly done are cheap. Prototyping is whistling five melodies and seeing which one you remember the next day.

#5: Tournaments: bracketing users. Social games tend to use bracketing for simple pvp matchmaking: it's under utilised.

#6: Opposition. A rival good is something that can't be used by someone else at the same time. You have my stuff, I can't use it. Non-rival is stuff that clones itself: information, etc.

#7: Dot-eating. I ate it, you didn't. Zero sum resource consumption.

Social Mechanics: The Engines Behind Everything Multiplayer (PDF)

Kids' MMOs are huge, not dominated by media giants

Reflecting on the VentureBeat report on big media companies' massively multiplayer online games for kids at the NYC Toy Fair, veteran game designer and entrepreneur Raph Koster points out that "kids worlds and media-driven worlds are probably more important than most all the AAA MMOs released 2007 to today. Whether that's a good thing... exercise for the reader."

Where's kids MMOs are at

I'm about to do an in-game chat with Metaplace, the online world started by Raph Koster -- creator of Star Wars Galaxies and Ultima Online. It starts at 0600h Pacific/0900h Eastern/1300h UK. You can get online through the embed above.

(Disclosure: I am an unpaid advisor to Metaplace)

Update: We're done! Thanks everyone, for a great chat! Read the rest

* It meant I got to see Star Wars in the theater, 13 times, at age 8 and 9, exactly when it would overwhelm my sense of wonder.

* I got an 8-bit computer at exactly the age when boys get obsessive about details, and I spent days PEEKing and POKEing and typing in listings from magazines and learning how computers actually worked.

* It meant at least half the new games I played were actually new ideas.

* And yet I got to play real pinball machines.

* New Wave science fiction was the used paperbacks laying around, and I got to read cyberpunk and steampunk as they were invented, and see SF when fandom was not yet a media circus.

* I got to play D&D from as close to the beginning as most anyone.

Why the EVE Online industrial espionage econopocalypse is "fun"

Recently, the spreadsheets-in-space game EVE Online was rocked by a huge scandal -- one of the largest virtual "corporations" in the game was infiltrated and toppled through in-game espionage. Much phosphor has been spilled over this, but master game designer Raph Koster has the smartest analysis I've seen -- explaining how this scandal was inherent to the nature of what made the game fun.

In any PvP scenario which has a temporal component – even one as simple as leaderboards – you need to “overturn the anthill” or else you will end up with a static power structure. The guy who held the record will hold it forever. The top guild will stay the top guild, etc. This is why you often see leaderboards offer different time spans – “best today,” “this week,” “all time,” etc. Otherwise, it’s hopeless to compare yourself against statistical outliers who always win.

In the case of something like a PvP-centric team-based game, there’s really two ways to accomplish this overturn. One is to wait until the empire rots from within (security breeds carelessness, inattention, and eventually vulnerability). The other is to aggressively force the rot, by attacking the hubs and attempting to co-opt them.

This has been used as a business tactic: World of Warcraft consciously pursued the guild leaders of the largest and most influential guilds in its successful attempt to dethrone Everquest. By recruiting them over to the new game, they managed to harm the social fabric of EQ while also creating a ready-made community within WoW.

Should employers discriminate against World of Warcraft players?

On a gamer forum, a vigorous discussion about whether it's fair for employers to discriminate against World of Warcraft players when hiring, on the grounds that WoW players are never fully out of the game. A surprising number of players agree with this proposition.

I met with a recruiter recently (online media industry) and in conversation I happened to mention I'd spent way too much time in the early 2000s playing online games, which I described as "the ones before World of Warcraft" (I went nuts for EQ1, SWG and the start of WoW, but since 2006 I have only put a handful of days into MMOG playing - as opposed to discussing them - I've obsessed over bicycles and cycling instead).

He replied that employers specifically instruct him not to send them World of Warcraft players. He said there is a belief that WoW players cannot give 100% because their focus is elsewhere, their sleeping patterns are often not great, etc. I mentioned that some people have written about MMOG leadership experience as a career positive or a way to learn project management skills, and he shook his head. He has been specifically asked to avoid WoW players.

I'm pretty chuffed to learn that Metaplace, a games startup that I'm an advisor to -- closed a new round of financing today, netting $6.7 million from their existing VCs and Marc Andreessen and Ben Horowitz. Metaplace was started by Raph Koster, who created Ultima Online and Star Wars Galaxies, with the idea of democratizing the creation of virtual worlds and games inside them.

Instead of gigantic, elaborate virtual worlds, like Warcraft and its competitors, Metaplace allows users to create modest, personal virtual worlds the way you'd put together a MySpace page, using a toolkit that unpacks into a series of ever-more-powerful tools that allow greater and greater customization. Users can then link up their Metaplaces, stringing together their worlds to make bigger, more complex ones.

There's an invite-only beta, and Raph's promised to update his blog whenever new invites are made available. Raph's one of my favorite people in the world, and he's a profound thinker about games (see his book A Theory of Fun [free PDF] for more). I'm really excited to see Metaplace thriving, even in the current crummy economy.

The kid-centric online game Club Penguin (acquired by Disney last year) adds 500-1000 words a day to its list of forbidden chat-words in an effort to keep things clean. Wanna bet that kids come up with 2000-4000 new variant spellings a day?

Merrifield also thinks that there is an over-reliance on technology that ignores the human element, which is why they've decided to devote two-thirds of the company's staff to positions such as safety moderators and customer service.

"We know the limits of technology, even though I would put our filtering software up against anybody's, especially because of that human element - we're adding 500 to 1000 words every day to the filters, simply because of slang that works its way into the language.

"And every new pop song that comes out is inevitably going to reference something that was innocent the week before, but isn't so much now," Merrifield said.

(via Raph Koster) Read the rest