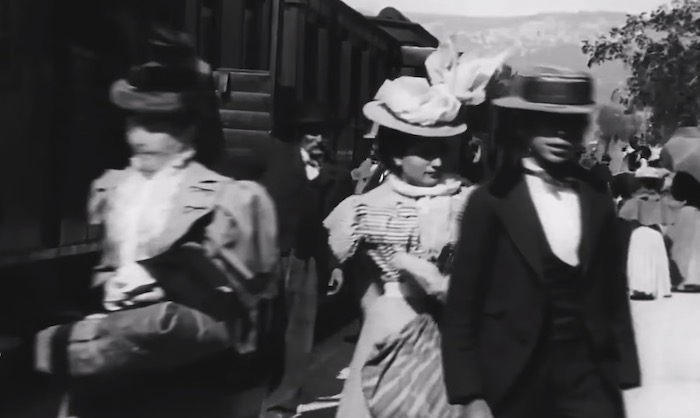 First, take a look at this 1895 short movie "L'Arrivée d'un Train Ã la Ciotat" ("Arrival of a Train at La Ciotat," from the Lumière Brothers. This film was upscaled to 4K and 60 frames per second using a variety of neural networks and other enhancement techniques. The result can be seen in the video below:

The Spot has an article about how it was done:

[YouTuber Denis Shiryaev] used a mix of neural networks from Gigapixel AI and a technique called depth-aware video frame interpolation to not only upscale the resolution of the video, but also increase its frame rate to something that looks a lot smoother to the human eye.

At this year's Conference on Computer Vision and Pattern Recognition, researcher Chen Chen presented a cool project that vastly improves the quality of images captured in low-light conditions.

Imaging in low light is challenging due to low photon count and low SNR. Short-exposure images suffer from noise, while long exposure can induce blur and is often impractical. A variety of denoising, deblurring, and enhancement techniques have been proposed, but their effectiveness is limited in extreme conditions, such as video-rate imaging at night. To support the development of learning-based pipelines for low-light image processing, we introduce a dataset of raw short-exposure low-light images, with corresponding long-exposure reference images. Using the presented dataset, we develop a pipeline for processing low-light images, based on end-to-end training of a fully-convolutional network. The network operates directly on raw sensor data and replaces much of the traditional image processing pipeline, which tends to perform poorly on such data. We report promising results on the new dataset, analyze factors that affect performance, and highlight opportunities for future work.

Capturing images of bystanders by zooming in on pictures of corneas

In Identifiable Images of Bystanders Extracted from Corneal Reflections, British psychology researchers Rob Jenkins and Christie Kerr show that recognizable images of the faces of unpictured bystanders can be captured from modern, high-resolution photography by zooming in on subjects' eyes to see the reflections in their corneas. The researchers asked experimental subjects to identify faces captured from these zoomed-in images and found that they were able to do so with a high degree of reliability.

The researchers used 39 megapixel cameras, substantially higher-rez than most people's phone-cameras, but low-cost cameras are making enormous leaps in resolution every day. What's more, the researchers suggest that the determining factor for identifying a face isn't resolution; it's having a viewer who is already familiar with the subject. It's an interesting wrinkle on the problem of information-leakage, and implies that future privacy-filters will have to scrub photos of reflective surfaces (especially eyes) of identifying faces before they're posted. Read the rest