Cocolab created this cool music-synched array of spotlights that visitors can walk through, sit in, and lose themselves in. It is part of this summer's TagCDMX event in Mexico, the theme of which was #BeMoreNerd. Read the rest

Suzuki Kango carved over 400 wooden parts for his senior thesis exhibition project: it uses "four magnetic stylus pens on a magnetic drawing board to mechanically write the full time every minute in 24-hour format." Read the rest

Last spring, we went to Venice to celebrate my wife's birthday and took a boat to the Biennale, which was pretty disappointing, with one notable exception: 'The Key in the Hand,' Chiharu Shiota's installation at the Japan pavilion, which took our breath away. Read the rest 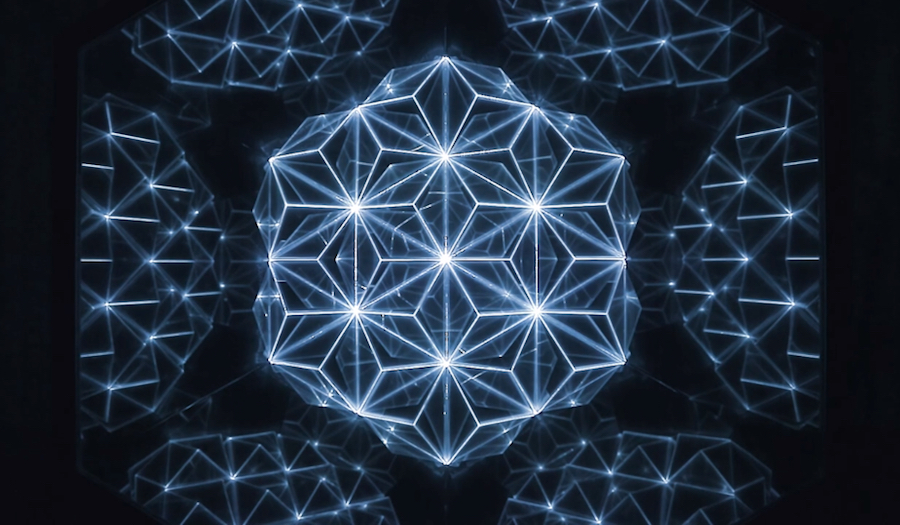 Sarah Frost's 2010 "QWERTY" installation at NYC's PPOW gallery was a pair of beautiful, overwhelming walls of keyboard keys, shrived from the keyboards and tiled from floor to ceiling. Read the rest

Graffiti/street artist Banksy has built and installed a BP-leak-themed dolphin ride on Brighton Pier. The coin-op ride offers trenchant commentary on the light liability borne by BP for its role in the poisoning of the gulf. Plus, it looks like a lot of fun! Read the rest

Here's a cool installation: "The project is presented as a monitoring room, which shows Peer-to-Peer transfers happening in real time on networks using the BitTorrent protocol. The installation produces an arbitrary cut-up of the files currently being exchanged. This immediate and fragmentary rendering of digital activity, with information concerning its source and destination, thus depicts the topology of digital media consumption and uncontrolled content dissemination in a connected world."

It's called "The Pirate Cinema." No relation..

(Thanks, Jan!) Read the rest

Sean Hathaway stuck 80 Teddy Ruxpins on a gallery wall and hooked them up to a sentiment-analysis engine fed by a social media scraper. Snippets of emotional, throwaway text are turned into synthetic ruxpin-utterances, accompanied by emotional music:

TED is a large, wall-based installation consisting of an array of 80 Teddy Ruxpin dolls that speak emotional content gathered from the web via synthetic speech with animated mouths. The speaking of the emotional content is accompanied by one of twenty-four musical vignettes that have been paired to the emotional content being spoken. Each vignette, representing one of twenty-four subtle variants of human emotion, have been composed in such a way that the beginnings and ends of the short pieces will seamlessly dogleg in any possible configuration and stream endlessly as a unified whole. The installation is allowed to drift about freely through the emotional landscape being driven only by those who are contributing content to the piece whether unwittingly or consciously. As such the overall presentation of the piece can vary greatly based on external conditions such as seasons, world events and even time of day. The piece is essentially taking the instantaneous emotional pulse of the internet and this collective pulse, like a human pulse, varies over time.

In Spring/Summer 2012 both guys were invited to create an installation version of Ping Pong Country in Lille’s Gare St. Sauveur. They were a bit tired of doing the same thing for such a long time over and over again, so they asked me to contribute some machinery to the environment in order to make it a bit different in its actual version. I came up with the devilish plan to offer the audience an opportunity for sabotaging the game in a playful way. “Ping Pong Country / Edition Sabotage” was born.

While some people play ping pong (preferably more than two players which then have to run around the table) another visitor can confuse the players via a separate control panel which is part of the sabotage edition: This destructive master mixer lets you switch the music to Heavy Metal (accompanied by disturbing strobe light); you can turn on fans on the ceiling for an additional wind challenge; you can just add some funny train and animal sounds with a supercool children’s toy, or – and now it comes – you can spill plenty of balls onto the ping pong table which you collected beforehand with the “Ping Pong Ball Suction Construction”!

Igloo made of stacked books

"Home," an installation at NYC's MagnanMetz Gallery by Colombian artist Miler Lagos is a stable igloo made of carefully stacked books.

An important characteristic of Suh’s “homes” can be found in the fact that they respond to the spaces in which they are exhibited and by doing so, bring about new interpretations to them. His artistic attempts in the unique Rem Koolhaas-designed architectural space at Leeum are especially remarkable in that light. Suh installed Reflection near the sloping passageway that leads to the exhibition galleries so that the work can serve as an introduction to the exhibition. In the Ground Gallery, he also built a home out of a soft, light, and translucent fabric that stands in a stark contrast with the almost overwhelming space made out of concrete. Suh first received wide attention from the international art world with a work in which he recreated, using thin jade-toned Chinese silk, the traditional-style house (hanok) in the Seongbuk-dong neighborhood of Seoul where he spent his childhood and adolescence. In addition to this work, titled Seoul Home/Seoul Home, he also presents in this exhibition other homes he has had in New York and Berlin. Through their placement in a museum, these private spaces become spaces for others that are open to interpretation through viewers’ experiences.

The Black Box, an especially distinct feature of the Koolhaas building, is like a “home within home” that floats inside the enormous space of the architecture.

Yayoi Kusama's installation The Obliteration Room at the Brisbane Gallery of Modern Art started as a stark white room, and then thousands of passing children were given brightly colored dots with which to decorate it. The result is exuberant and marvellous.

Staircase covered in a cascade of synthetic human hair