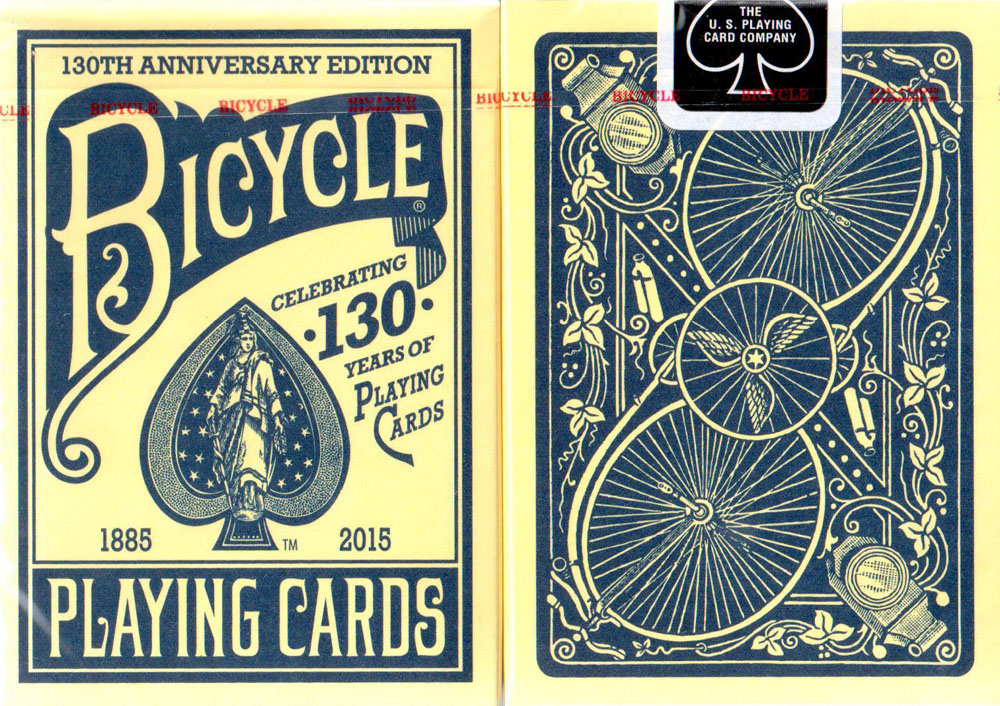 Jason and I are both fans of Bicycle playing cards, manufactured by the United States Playing Card Company (USPCC). I have been handling USPCC cards for an hour a day or longer for the last couple of years (while on the phone, watching TV, hanging out with friends) and I have become a card snob.

Playing cards made by USPCC use three layers of paper: two outer layers of thin paper, and a thicker stiff piece of card sandwiched in the middle. The result is a strong, springy card that feels good and has a nice snap to it. A lot of cards made by other manufacturers use just two layers or even one layer of low quality paper. They crease easily and wear down quickly and are unpleasant to use for games or magic tricks.

The Bicycle 130th Anniversary Playing Cards ($(removed) on Amazon) are made with the same 3-ply process used in all of USPCC's cards. They have the "Wheel No. 1" card back design from 1887. One interesting thing to note about this design is the three-winged symbol in the center. This makes the card asymmetrical, which is a desirable feature for card cheats and magicians. For instance, you can turn all the Aces in the deck around with one of the wings pointing straight down, and have all the other cards with two wings pointing down, making it possible to identify the Aces by spreading the deck face down. (In 1907 the three-winged symbol was replaced by a symmetrical 4-winged symbol.) Read the rest 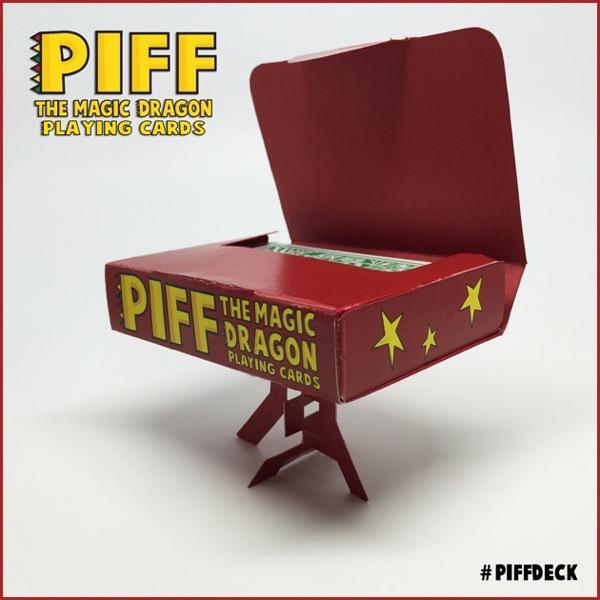 For a long time the needs of magic dragons everywhere have been overlooked by playing card manufacturers. Why spades, hearts, clubs and diamonds? What about flames, flowers, paws and… ok let’s not mess with the diamonds. And why are there no Magic Performing Chihuahua Cards? If you’re a magic dragon, those are pretty integral. And the box does even have its own stand? Weird.

So I decided to change all that.

Introducing the Piff the Magic Dragon Deck of Playing Cards! Two years in the making and breaking pasteboard boundaries.

The tuck box is based on my Tacular. So I called it a Tuckular. The original Tacular has legs that unfold and pop out to convert it from a suitcase to a table. They are based on something called a Harbin stand, created by Robert Harbin, one of the greatest magical minds of the 20th century who also happened to be an expert origami enthusiast. When I was on tour in 2012 I came up with a playing card version of it which planted the seed of a complete deck of cards.

We’ve been able to add some sweet stretch goals along the way, with options like metallic green ink, gold Piff coins, sandwich cards and even some stickers. I really want to make it to $50k so we can produce some tiny Mr Piffles’! The dream!

I worked with Claire Blackledge, an artist in the uk, who has created all of my branding and images. She started on these t-shirts (attached) and I loved them so much I got in touch with her and asked her to do more. Read the rest 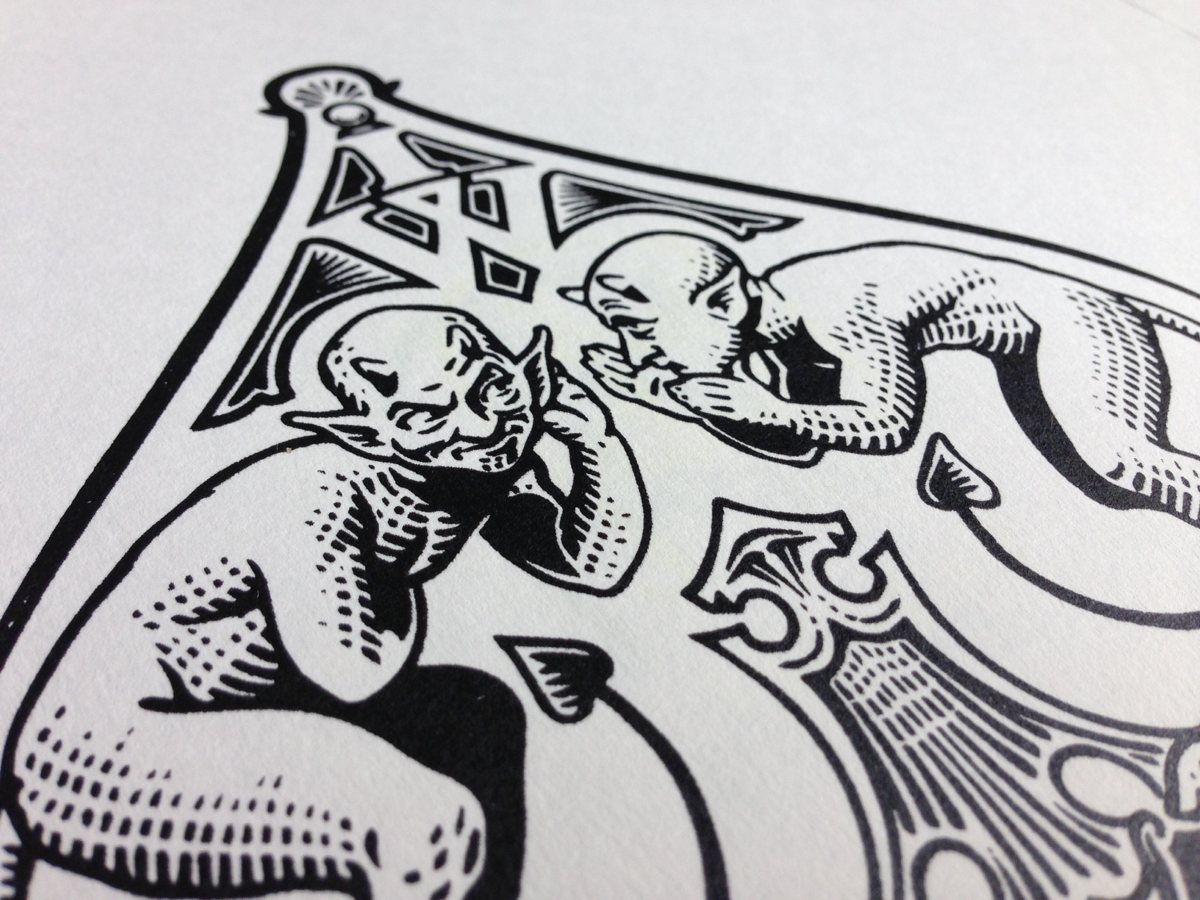 Whispering Imps might be the most beautiful deck of cards I’ve seen. The Ace of Spades, the King of Diamonds, the two Jokers, and the backs of all the cards have drawings of imps (mischievous little goblins of German fairy tales) inspired by the classic 1894 magic poster for Kellar the Great Magician, which feature a pair of imps whispering in his ears. 1894 also happens to be the same year that the United States Playing Card Company (USPCC) was founded. USPCC is still in business and makes the highest quality playing cards. They make Bicycle cards, as well as Tally-Ho cards, and other decks. They also manufacture Whispering Imps for Whispering Imp Productions.

The original red-backed Imps are sold out, but you can buy the even cooler Black Edition on Amazon. My deck was given to me by professional magician Andrew Mayne (who is going to be giving a “how to break out of a straitjacket” workshop at Boing Boing’s Weekend of Wonder extravaganza on September 18-20, 2015). If these cards are good enough for Andrew, they are good enough for me!

Register here to join us at Boing Boing's Weekend of Wonder. 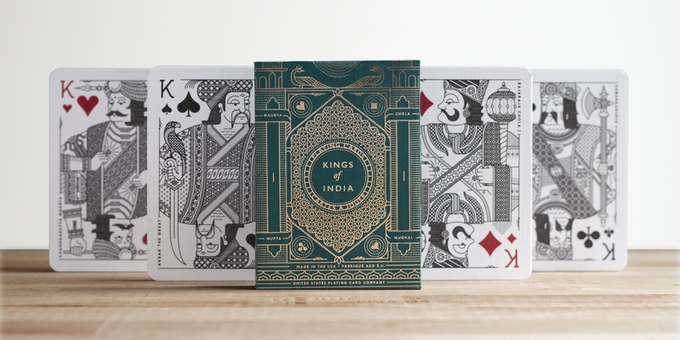 The Kings of India playing card deck looks fantastic. It has met its funding goal on Kickstarter, but they have not yet met the stretch goal that will enable the creators, Bhavesh and Reena Mistry, to include embossed details on the box. 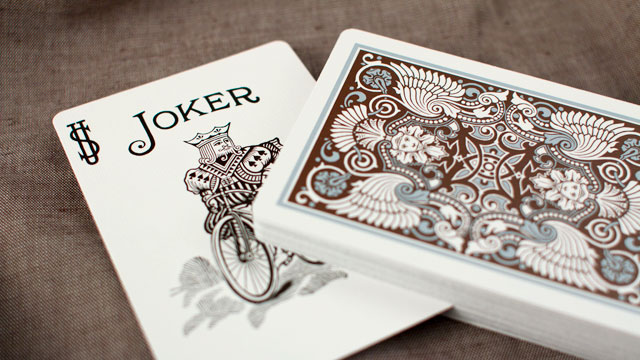 I like the muted hues of the Bicycle Pluma deck. The red ink has a lot of brown in it, as if you are looking at the cards through dark sunglasses. The pips are different from the standard Bicycle deck, too -- more old fashioned looking.

The coolest thing about this deck is that, unlike a standard Bicycle deck, the Pluma has a "one-way" design on the back -- one of the leaves under each the four wings is white (the other three are blue). There are a lot of magic tricks you can do with a one-way deck.

Attractive conversation piece decks are helping to cover my bad sleights of hand. This Sideshow Freaks deck is absolutely beautiful. Read the rest

How to make your own sliced deck of cards

A few hours after I ordered a box of half-wide playing cards I realized I had the tools and materials to make my own. Read the rest

My daughter has picked up one of my bad habits: collecting decks of playing cards, especially unusual ones. She's going to be delighted with this 2-pack of "sliced" cards ($(removed)), which are half as wide as a regular poker deck. I'm excited to see how well they work with magic tricks. Read the rest

The amusement I get from looking at this weird-looking card is worth more than the 60 seconds it took me to make it. No tape, glue, or hidden cuts are needed. If you can't figure out how to make one, someone in the comments will show you how to do it. Read the rest