One of the cool things about LED lighting is that it provides opportunities to bring some of the benefits of big, modern infrastructures to developing countries without having to actually build the big, modern (and expensive) infrastructure.

A couple of years ago, I wrote a story for ArchitecturalSSL magazine about people installing solar-powered LED streetlights in remote villages in southern Mexico. Tying these places into the larger electrical grid would have been extremely difficult. But solar LED streetlights allowed the people who lived in those places to get the night light they wanted.

Now there's similar work happening in refugee camps in Haiti, where many people displaced by the 2010 earthquake still live. The change is undoubtedly useful: LED streetlights don't have to be powered by expensive gasoline generators, they're better on the lungs than fires, and the light level is bright enough to allow people to work and live far more easily. But what about physical safety? Surprisingly, there turns out to be a decent amount of debate over whether or not the extra light actually reduces violence and makes people safer. It's an interesting case study in how "common sense" doesn't always match up with reality and how difficult it is to attribute cause and effect in complicated social environments. From at story Txchnologist:

In recent months, the lights have come on at two camps through the efforts of aid groups, the Haitian government and the particular expertise of the Solar Electric Light Fund, or SELF, a Washington, D.C.-based

No, you're not in love with your iPhone

The New York Times has an op-ed out today, which claims that fMRI studies show that, when people are exposed to a pretty, shiny, ringing iPhone, the experience lights up the part of their brains that signifies a deep, compassionate love for something. iPhones trigger the same brain activity that your parents and loved ones trigger, writes branding strategist Martin Lindstrom.

Clearly, this was going to turn out to wildly misleading. You love your iPhone like you love your mother is just not the kind of statement that passes a cursory bullshit inspection. And lots of people have handily debunked it, including a couple of actual nueroimaging specialists, Russ Poldrack and Tal Yarkoni.

So, how wrong was the NYT op-ed? Pretty damn wrong. Turns out, the part of the brain Martin Lindstrom identifies with lovey-dovey emotions is a lot more complicated than that. Here's Russ Poldrack:

Insular cortex may well be associated with feelings of love and compassion, but this hardly proves that we are in love with our iPhones. In Tal Yarkoni's recent paper in Nature Methods, we found that the anterior insula was one of the most highly activated part of the brain, showing activation in nearly 1/3 of all imaging studies! Further, the well-known studies of love by Helen Fisher and colleagues don't even show activation in the insula related to love, but instead in classic reward system areas.

And Tal Yarkoni adds a lot more to this:

... the insula (or at least the anterior part of the insula) plays a very broad role in goal-directed cognition.

The neurobiology of politics

What, if anything, should we make of studies that purport to find neurological differences between people who self-identify as "conservative" and people who self-identify as "liberal?" You've seen studies like that in the paper. You've heard them argued about on radio and TV shows. But what do they actually mean? Is this just so much high-tech phrenology? Is it a smug way for one group to make snide commentary about the other group under the guise of "science?" Is your political affiliation determined by your mind, or by your brain?

Behavioral therapist Andrea Kuszewski has a great guest post up at The Intersection blog, looking at what we can (and can't) learn from the handful of studies that have attempted to link politics and neurobiology. None of these studies have been perfectly well-done, she writes. But, despite being flawed in different ways, they're coming to some of the same conclusions—conservatives seem to have a more active amygdala and liberals seem to have a more active anterior cingulate cortex. You can shorten that into a headline-grabbing statement about conservatives being driven more by emotions and liberals by logic. But it's really, really not as simple as that.

This is definitely a story worth reading all the way through. Read the rest

The agony and the ecstasy

Scientists have developed a modified form of ecstasy that can kill blood cancer cells in a test tube. It's really fascinating chemistry, but please note the italics and do not try this at home, kids. Read the rest

What's it take to get off nuclear power?

To get off nuclear power, Germany plans to make its electricity system 80% renewable by 2050. That's not going to be easy. Just to reach the first milestone of that goal—35% renewable capacity by 2020—the country will have to build 2,800 miles of new, high-voltage transmission lines. Although, one significant thing missing from this story: How many miles of transmission lines Germany would have normally built during that time. Even so, watch this space for financing debates, NIMBY wars, and what promises to be some really fascinating problem solving. (Via Michael Noble and thanks to Chris Baker!) Read the rest 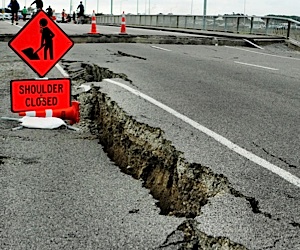 This is a story that contains a whole lot of yesbut. Yes, it really does make sense that climate change could trigger earthquakes. But it's very, very unlikely that that effect is responsible for any of the monster quakes we've experienced recently. And behind that apparent contradiction lies some really, really interesting science. Read the rest