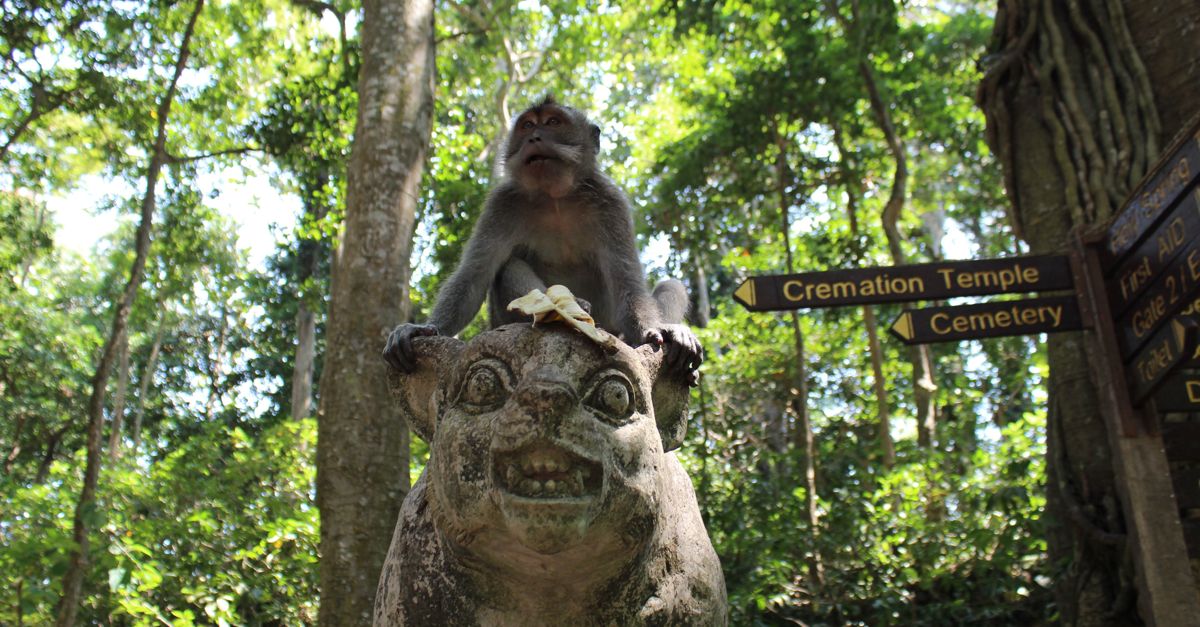 When you see a troop of screaming crab-eating macaques rushing at you from the surrounding forest, you're only thinking one thing—Mean Monkey Monday.

People told us that taking a walk through the Sacred Monkey Forest in Ubud, Bali is simply an amazing thing to do. In addition to numerous crab-eating macaques, the forest's namesake monkeys that make their home in the area, there are three different temples inside the borders of the forest that are worth seeing. So we decided to check it out. After all, monkeys are cute, right?

Even before you get into the forest, you're going to encounter monkeys. There are always at least a few hanging out on the wall that runs along the appropriately named Monkey Forest Road, and they even venture a short distance into the southern end of Ubud Village, where they often lounge about in the middle of the street, oblivious to cars and motorbikes.

But it's not until you pay your entrance fee (30,000 rupiah for adults, 20,000 for kids—about $8.00 U.S. for our family of four) that you really get the full monkey experience. Something like 600 monkeys are said to live in the Monkey Forest, and they all want one thing: food. If you have food, or if they think you have food, or if they think anything you're carrying might have food, they're coming for you. They'll climb right up your body and grab your stuff.

Inside the forest vendors sell bananas you can hand-feed to the monkeys. A small bunch will set you back 20,000 rupiah, a large bunch is 50,000, and as soon as you've got a bunch of bananas in your hands, look out, brother, because you're a target. Sure, we thought it would be fun to feed these grabby little primates, but it got downright frightening very quickly.

We watched a guy offer a banana to a monkey, only to snatch it away as the monkey reached for it. He repeated this game over and over and the monkey got angrier and angrier until it was squawking and screaming at him. I was thinking, "Dude, just give the monkey the banana!" Then the monkey jumped on him and ripped the banana from his grasp before leaping off and perching itself on a statue to devour the banana with gusto.

The scariest moment came when we watched one monkey scamper up a man, climbing up his torso to perch on his neck. The man was carrying his infant son strapped to his back, and the monkey screamed at the kid, then tried to bite the child in the face. The man reacted quickly and threw the monkey on the ground. Fortunately, the kid didn't get bit, but all the nearby monkeys started up with a chorus of screaming.

It felt like one of those horror-movie moments when a party of teenagers are lost in the woods and stumble upon some cute thing and everyone says, "Aw, isn't that cute." Then it turns from cute to evil and kills them.

These monkeys are even mean to their own offspring. My daughters kept trying to give bananas to the baby monkeys, but the adults would rush in to snatch the food right from the baby's hands, leaving the baby nothing but a banana peel to gnaw on.

The monkeys became increasingly aggressive with every feeding encounter, and I was really regretting buying each of my daughters a small bunch of bananas.

When we ran out of bananas (and it didn't take long; it was the fastest 40,000 rupiah we ever spent), one of the monkeys grabbed my youngest daughter's colorful camera case and wouldn't let go. Now I've adopted a go-with-the-flow attitude for the trip, but this monkey scared the crap out of me.

As I tried to shake the monkey loose from the camera case (you're not supposed to touch the monkeys), all I could think of was Mean Monkey Monday 11. I'm not quite sure how, but I managed to dislodge the critter, and we high-tailed it out of there after that.

These monkeys are aggressive wild animals that have no fear of humans. People are bitten and scratched by monkeys every day in this forest (especially on the feet; wear closed-toed shoes). We were lucky to have escaped unscathed.

Indonesia government officials are shutting down tourist visits to Komodo Island for 2020 because smugglers are stealing the fantastic Komodo dragons and selling them on the black market. All next year, conservationists will focus on boosting the dragon population and habitat preservation. From CNN: Though plans to limit the number of Komodo visitors have been […]