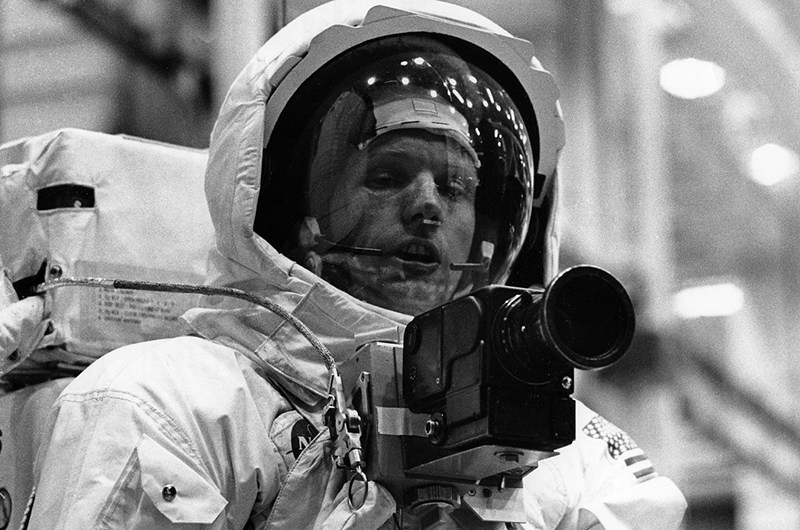 The moon is a pretty desolate place and the truth is, you just don’t have a whole lot to work with. You’ve got moon dust, some craters and if you’re lucky, you’ve got some shadow and light.

To make your lunar photos really pop, you’re definitely gonna need to bring some props and your creativity cap. Let's take a look at how past visitors to the Moon handled their photographic challenges.

Image composition is everything and if I had my way, this one from the Apollo 11 photography mission would win an award for sure! Not because of Buzz Aldrin’s believable, “I’m leaning on a bar to my left” pose, but because of the subtle nod to the then hit TV show Batman.

The horizon line is just lopsided enough to make you feel as if you’re right there in a villain's lair with the Joker, The Riddler and The Penguin.

It’s the little things that can really make your Moon composition sing!

This angled shot became so iconic, that it’s been copied in other photographic missions to the Moon as well.

Kiss the Sphinx in Egypt…

or strike the Rocky pose in Philadelphia…

So too, do Astronauts feel the need to recreate the “villain’s angle” in their compositions. Apparently, it’s like astronaut crack to them!

Here we see Astronaut Pete Conrad of the Apollo 12 mission pretending to study the Surveyor 3 space-craft. But now you know he’s simply keeping up the cosmic gag of paying homage to Armstrong’s composition.

I sincerely hope that when you get your chance on the Moon, you’ll do the same!

Here’s the famous and hilarious photograph of Alan Bean (photographed by Pete Conrad from the same Apollo 12 mission). Of course, at first glance, it looks like a study of reflection and infinity but now that we’re in on the joke, and know to look for the angle, it’s absolutely hilarious!

On the Apollo 14 photography mission this historical photo of Commander Alan Shepard planting the US flag, yields something very special if you look closely. It’s NASA’s magnum opus when it comes to the villain’s angle.

Did you notice the dot in the upper right hand corner of the image?

The positioning of that star and the horizon line are not placed by happenstance.

If you mark the point on the horizon in which the “villains angle” begins and run a beeline straight through the lone star, we hit the constellation of Lepus.

Lepus, as everyone knows, is the constellation just south of Orion that's known as the rabbit that's hunted by him and his dogs.

But, 18th century Chinese mythology tells us that this rabbit constellation is associated with the Moon Rabbit of Lunar mythology -  the hare who toils on our Moon, day and night, making the elixir of immortality.

But just as important, Lepus is also famous for having what's known as a Vampire star.

A vampire star is a star that slowly drains the life of other stars near it.

And so we’ve come full circle, and in case I’ve lost you, here are the 7 steps in this nonsensical thread that’ll lead you to understanding the sheer, mad genius of Alan Shepard's photo.

2) Lepus is known as the rabbit hunted by Orion

3) in Chinese mythology, the rabbit in Lepus is connected to the Moon Rabbit

4) the Lepus constellation has a vampire star

5) vampires are associated with bats

6) bats are associated with Batman

7) Batman is associated with villains and their lairs

You can now begin to appreciate the true, subtle genius of the good people at NASA. This magnum opus nod to the “villain’s lair” concept gives me the chills every time I think about it.

By the time the Apollo 16 photography mission came to be, NASA needed a gimmick and it just wasn’t enough to pay homage to a television show from the past decade. To the geniuses in Pasadena, CA the answer was simple - they would explore a more avant-garde approach.

You’ll notice the complete lack of desire to fill the frame with the subjects at hand, letting the viewer’s imagination fill in the blanks. This mindset is very important when trying to capture compositions that you’ve traveled only 239,000 miles for.

Always, and I mean always, let a touch of mystery exist in your Moon photography. It’s no coincidence that NASA’s motto, for so long was, “Well, there’s always next mission”.

By the end of the Apollo 16 photography mission, it was clear they were running out of visual concepts.

And here we have the equally famous image of Lunar Module Pilot, Charles Duke saluting - while jumping.

By the Apollo 17 photography mission, they were just kinda standing around doing the same routines as before - or nothing at all.

At this point, NASA's photography missions appeared to be phoning it in the same way time and time again.  While I agree that imitation is the sincerest form of flattery, at the cost of $700 million dollars a pop, it was no wonder the Apollo photography missions didn’t go to 18.

When you decide to make your own trip to the Moon, be sure to leave some objects behind to commemorate your visit.

Cosmic geocaches like the Lunar Rover, golf balls and family photos will be sure to delight visitors for centuries to come.

Anyway, I hope that you've enjoyed this exploration in Moon Photography 101. After making all of this up, I'll never look at Moon photography the same way again.

If you're planning a visit, please drop me a line so we can hook up.

Maybe I'll see you there and we can swap Moon vacation photos.