All smart TVs are watching you back, but Vizio's spyware never blinks 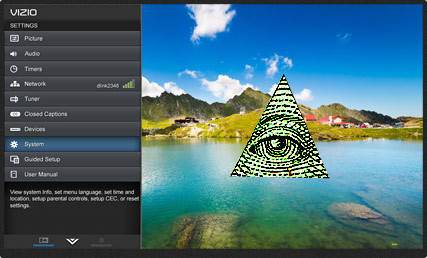 Vizio made news last April when it pushed out a firmware update that turned on all its' sets spyware features out of the box. Since then, it's only gotten worse.

A Pro Publica investigation found that Vizio has comprehensively won the race to the bottom, turning on more invasive features and offering fewer privacy promises than competitors like Samsung and LG.

Vizio sets track your viewing habits in fine-grained detail, and share that information, along with information that can be used to personally identify you, with a variety of third party data-brokers who can then link this to your online activities. Vizio has a hot-ticket item: US privacy statutes prohibit cable operators and streaming services from selling this information, but Vizio says these privacy laws don't apply to the company that supplies your TV itself.

The company is using this to its advantage as it readies its IPO, whose prospectus touts the company's ability to track "highly specific viewing behavior data on a massive scale with great accuracy" as a reason to be optimistic about its future earnings.

Vizio’s actions appear to go beyond what others are doing in the emerging interactive television industry. Vizio rivals Samsung and LG Electronics only track users’ viewing habits if customers choose to turn the feature on. And unlike Vizio, they don’t appear to provide the information in a form that allows advertisers to reach users on other devices.

Vizio’s technology works by analyzing snippets of the shows you’re watching, whether on traditional television or streaming Internet services such as Netflix. Vizio determines the date, time, channel of programs — as well as whether you watched them live or recorded. The viewing patterns are then connected your IP address - the Internet address that can be used to identify every device in a home, from your TV to a phone.