Tracking down the infamous orgasm mushroom 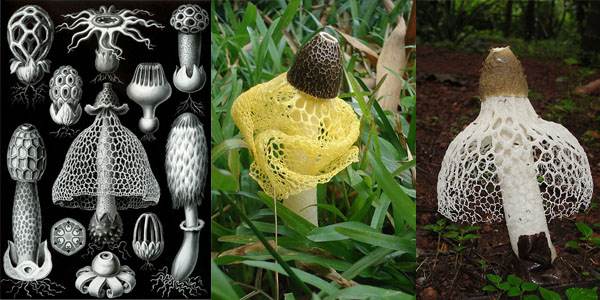 Last year I posted about a Hawaiian mushroom that allegedly induces orgasms in women who sniff it. Christie Wilcox, a writer for Discover, read the post and went on a mission to track down and test the mushroom's effects on herself. It's called "Expedition Ecstasy: Sniffing Out The Truth About Hawai‘i’s Orgasm-Inducing Mushroom" and it's a great read.

As the story goes, one day, [John C.] Holliday [author of the paper, "Spontaneous Female Orgasms Triggered by the Smell of a Newly Found Tropical Dictyophora Desv. Species"]needed an x-ray, and ended up politely chit-chatting with the x-ray technician in Hilo on the Big Island of Hawai‘i. “She said ‘What do you do?’, and I said ‘I am a mushroom scientist’, and she went, ‘I have to ask you: my mother and I like to go out and sniff mushrooms. Do you think we are crazy?'”

She was reluctant to explain why she and her mother did this, but eventually, she admitted to Holliday that she got a kind of euphoric effect from the smell. “It did not sound real but worth looking into,” Holliday told me. “I talked them into taking me out on their little adventure, and a group of girls on Saturday morning and I went out to Lava Tree State Park and found them. Found one, that is it—they are not common. That one got used up. I took photographs of it, and I posted photographs all around that area, and I put a reward out for this. I got three or four calls, and when I plotted them on the map, they were all within about a two- to three-mile radius around Lava Tree State Park. They were all found either under Albizia trees or Casuarina trees.”

“There you go; that is all I am going to tell you. Have fun.”