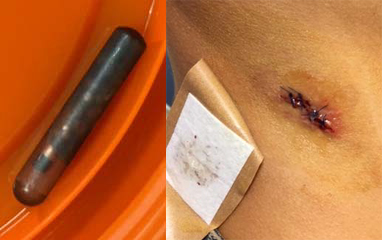 An anonymous ER doctor treated a woman who claimed she had a tracking chip embedded in her body. At first he disbelieved her -- lots of people suffer from delusions that they have implanted microchips -- but then she showed him the suture.

The woman was had been enslaved by a pimp who'd implanted an RFID chip of the sort used to locate lost pets.

It's not clear to me what the enslaver hoped to gain by this -- an RFID chip is useful for identifying something you have possession of, but it won't let you track down things if you don't know where they are. There's no such thing as an implanted tracking radio.

“It was a small glass capsule with a little almost like a circuit board inside of it,” he said. “It's an RFID chip. It's used to tag cats and dogs. And someone had tagged her like an animal, like she was somebody's pet that they owned.”

This is human trafficking. It’s a marginal issue here in the U.S. for most of us. Part of that is because the average person isn’t sure what human trafficking – or modern day slavery – actually means.

Health care takes on the fight against trafficking