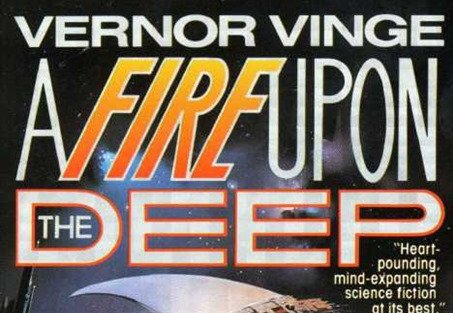 Chris writes, "I bought my first e-book in 1998, before my e-reading hardware had even arrived yet. Yesterday I discovered that Barnes & Noble has effectively stolen that book from me, mistakenly replacing it it in my Nook library with another title I never bought."

"B&N's customer service rep's most helpful suggestion was that I could buy the e-book again -- he even offered to give me the link. Is it any wonder Barnes & Noble is having such a hard time competing with Amazon?"

But imagine my surprise when I found that, rather than the original version, I had the BookRags A Fire Upon the Deep study guide in my library—an off-brand Cliff’s Notes on the book—instead. I never bought said study guide, because I don’t buy study guides. Apparently somewhere along the way Barnes & Noble got confused over titles and substituted it. The original book itself was nowhere to be found.

I wasn’t too concerned—I still have both editions safely in my Calibre library on Dropbox—but I was bemused. I decided to contact Barnes & Noble chat support and see what they could do for me. After I explained the problem, the representative told me that I could go ahead and purchase A Fire Upon the Deep if I wanted, and offered to give me the link.