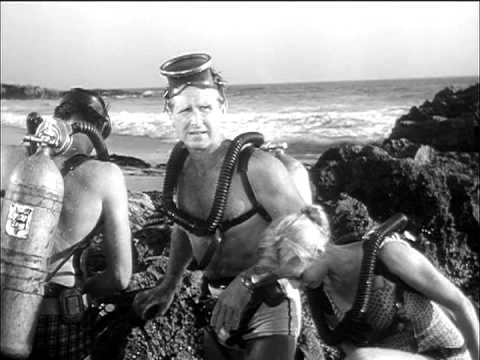 Former US Navy frogman Mike Nelson (played by Lloyd Bridges) led a life of adventure in the 1958 to 1961 action-adventure television show Sea Hunt. The show inspired generations to explore beneath the sea. Last weekend a group of Sea Hunt reenactors took to the water in Florida to relive the dream.

Divers with old-school scuba gear plunged into Silver Springs State Park's headspring not only to search for adventure but to create it. They wrestled a fake anaconda and stabbed at fake bad guys with rubber knives.

The annual Springsfest — now dubbed the Florida Springsfest — featured a crew of divers presenting Sea Hunt Forever, re-enacting scenes from the iconic TV show in Silver Springs. It was the headline attraction for this interactive family festival that celebrates the springs and educates guests about protecting waterways in Florida.

I hope we get to see some more video clips.

The television show inspired comic books and other spinoffs.

I am heartbroken. Every story I read about the loss of Truth Aquatic’s Conception leaves me crying. I’ve been diving with Truth Aquatics since I was certified in the late 90s. When I was young they were the Cadillac of California’s Live-Aboard fleet. My dive buddy, Bill, and I used to sit around debating if […]

To keep my scuba face mask from fogging up I was taught to spit in it. You then wipe your saliva around and put on the mask. The very first time I was standing on the deck of a boat, waiting to jump 15 feet to the water and needed to spit in my mask, […]