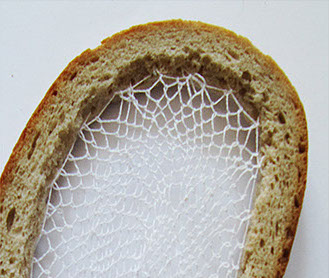 Slovakian artist Terézia Krnáčová produced a series of toast slices called "Everyday Bread," in which each slice is embroidered in a different pattern.

My concept is expression of my personal relationship with textil. I love textil art and I can‘t live a day without it. I made a composition of seven, as there are days in week, dry slides of bread, six of them processing by textil techniques and the seventh is just a slide of bread as Sunday, which is a day of relaxation.