Boston Globe previews a front page from the Trump presidency 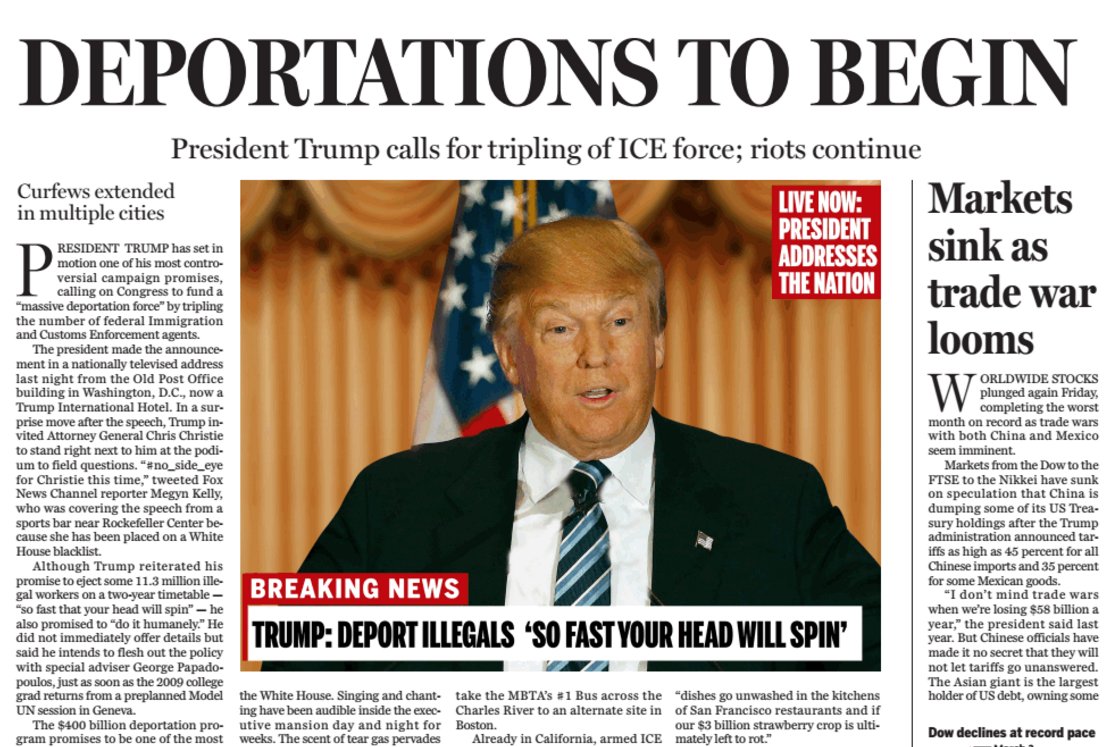 The Boston Globe's front page today is a piece of design fiction that offers a glimpse of the first days of a Trump presidency, with headlines like "DEPORTATIONS TO BEGIN: President Trump calls for tripling of ICE force; riots continue"; "Curfews extended in multiple cities"; "Markets sink as trade war looms"; "US soldiers refuse orders to kill ISIS families"; and many sly digs, including the news that "NASA engineers halted the launch of an unmanned probe amid fears that its new gold leaf trim would interfere with radio communications."

The front page accompanies a full-page, unsigned editorial titled "The GOP must stop Trump." The editorial asks the party to confront the policies that brought it to this juncture -- and finishes by calling on the party to nominate Paul Ryan or Mitt Romney.

At some point, after the election, Republicans will also need to ask themselves some tough questions about how their actions and inactions made the party vulnerable to Trump. After all, a candidate spewing anti-immigrant, anti-Muslim, authoritarian rhetoric didn’t come out of nowhere; the Tea Party has been strong enough long enough that someone like him shouldn’t be a surprise. Chasing short-term political gains, the GOP missed a lot of chances to fight the hateful currents that now threaten to overwhelm it.

For now, Republicans ought to focus on doing the right thing: putting up every legitimate roadblock to Trump that they can. Unexpectedly, a key moment in American democracy has snuck up on the GOP. When he denounced Trump, Romney said he wanted to be able to say he’d fought the good fight against a demagogue. That’s the test other Republicans may want to consider.

Action doesn’t mean political chicanery or subterfuge. It doesn’t mean settling for an equally extreme — and perhaps more dangerous — nominee in Ted Cruz. If the party can muster the courage to reject its first-place finisher, rejecting the runner-up should be even easier.