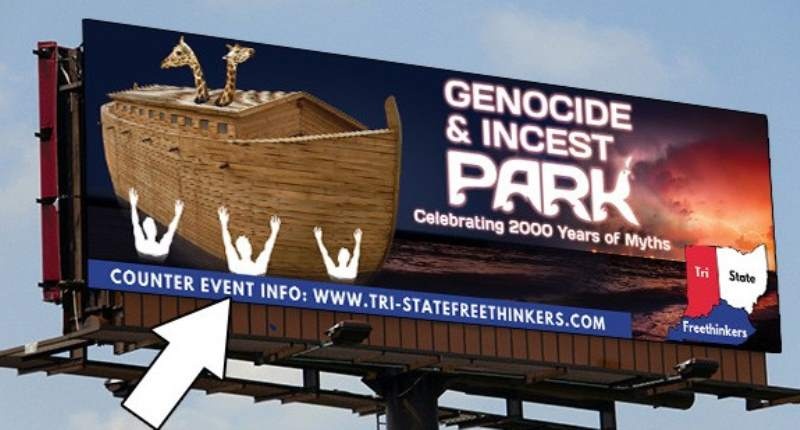 Kentucky's tax-payer funded creationist amusement park is hiring, and all types of 'Christian' are welcome. Answers in Genesis, the park operator, plans to hire several hundred adherents who will be required to sign papers confirming they have accepted Jesus Christ as their savior. Kindly, the park won't discriminate against various flavors of Christianity!

Somehow it is legal to use tax dollars for this.

In January, Answers in Genesis won a federal court ruling allowing it to hire workers based on religious beliefs. The religious group also seeks US$18 million worth of Kentucky's tourism tax incentive. U.S. District Judge Greg Van Tatenhove ruled that the group can impose a religious requirement for its employees under an exemption on the 1964 Civil Rights Act.

"We are a religious group and we make no apology about that, and (federal law) allows us that," said Ham on Thursday. "We're requiring them to be Christians, that's the bottom line," he added.

There was also a question on whether Answers in Genesis will allow Catholics to work at the Ark Encounter. Kentucky Paleontological Society president Dan Phelps said Catholics usually do not interpret things literally since they do not have the tendency to be fundamentalists Christians.

In response to Phelps' query, Ham said they will not make any distinctions between the different Christian denominations. As long as the future workers sign the statement, they can work in the theme park.

There goes my dream of being the funny guide at Jesus-centric Jungle Boat tour.

Kentucky is a backwards wonderland