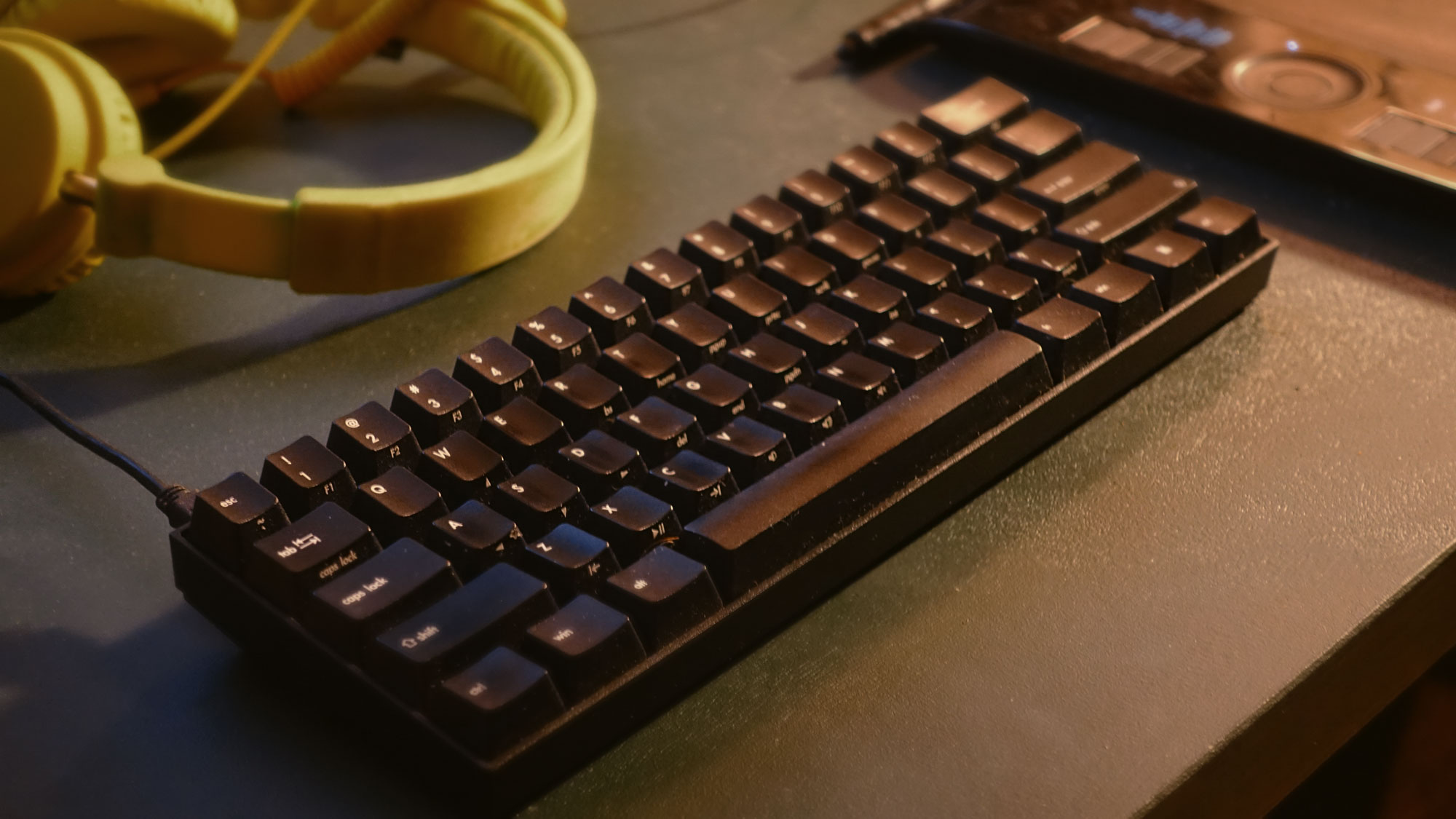 Lured by the internet's pervasive insistence that it represents a superior, more comfortable typing experience, I recently went back to an old-timey mechanical keyboard. This was a mistake. I am now a hamfisted ASCII jazz disaster.

As laptop keyboards got flatter and less tactile over the years, I lied to myself twice. The first lie was that I wasn't adapting. The second lie was that I could go home anytime I wanted. But the cold truth is that the journey is home, because we're always typing. Muscle memory doesn't care much for elegant weapons from a more civilized age, unless we use them now and again.

After all, my last laptop was the 12" MacBook, whose keyboard protrudes less than 1mm from the casing. This was tough on many typists' fingers, and many buyers complained about it. But I didn't have much trouble with it at all. Even iPad screen-typing is second nature, these days. Surely switching back would not just be easy, but a relief from untested innovation; like slipping into the warm embrace of a century of technological refinement.

NO. Abandoning the laptop for a traditional workstation, I found myself reduced to finger-flapping incompetence.

At this point in a review or story, a correspondent would be usually expected to embark upon a structured discussion of their experience. Something tangible. But this is as hard to describe as learning to ride a bike, or swimming – not least because I seem to have forgotten how. There's little in the way of conscious technique for an everyday self-taught typer. One's fingers drift after hitting a key, floating from letter to letter.

Before, I'd elegantly tap along at 100 WPM. Now I find my fingertips catching over and over on the lip of a keycap, unused to having to arc over the looming edges of these towering plastic cliffs. My fingers tumble and fumble on in a terrible drunken dance. BACKSPACE. Clatter clatter clst–BACKSPACEBACKSPACE. I have to slow down just to get a word out. I have to adopt a strange pecking cadence, my fingers rearing back like cartoon spider legs to drum away at this thick slab of machinery. BACKSPACEBACKSPACE.

A combo-move, a subconscious flutter of the fingers that used to result in a common word being committed perfectly to the screen? Instead my hands form a shambolic sausage-parody of an old typewriter's jammed bars, writing garbawgte. BACKSPACE. BACKSPACE. BACKSPACE.

And granted, I have some confessions to make regarding how difficult I made things for myself. My switch to a mechanical keyboard came with a switch from Mac OS X to Windows 10, which meant re-learning another (and less consistent) language of shortcuts and keyboard norms.

I also chose a keyboard without a numeric keypad: while this is normal for laptop users, it seems much more limiting in Windows than in OS X. For example, typing non-ASCII characters in Windows – emdashes, accents, copyright symbols – requires control codes to be punched in on a numeric keyboard. It's a reminder of Windows' trademark blend of complexity and decrepitude, and my own ineptitude.

After a few weeks of this, though, things are returning to normal. The promised homecoming experience may be a myth, but there is a certain magic to the feel of keys resisting and yielding to action, a human and tactile rhythm that's baked into the technology of mechanical keyswitches.

And I do have a recommendation, having tried a few models. If, like me, you want to try a small "60%" keyboard (lacking both a numeric keypad and arrows), I suggest the KB Paradise V60. This one has a unique setting that lets you assign arrows to the bottom-right Shift/Control group, without which things will be unpleasant for you. There are a vast number of alternatives to choose from, though, in every size and keyboard layout you can imagine. Polygon reviewed a bunch of full-size models earlier this year, for those less adventurous.

One of my favourite things about mechanical keyboards is the wealth of colors and styles you can order keycaps in, and the thriving creative subculture (gallery) built around customization. Subtle ombré effects are in vogue, as in this design (below) posted to Reddit by bloop.

I also covet this Planck keyboard (below, photographer unknown), even though it would completely ruin my life.

And here's "Unicorn Vomit," the future of productivity (per Alexander Müller)

Note: If you take the plunge, know that not all mechanical keyswitches have the vaunted clicky sound. Many are now sold without der klikken. Be sure to research the clickiness choices if such things please you.