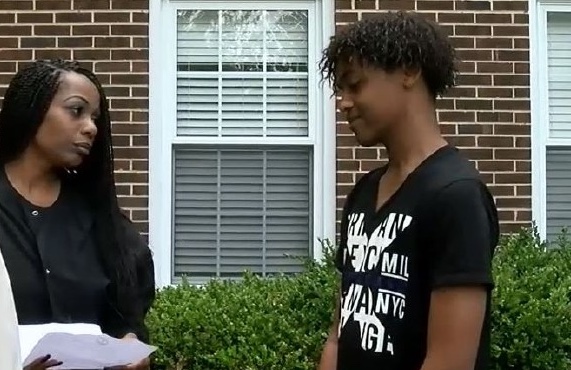 Virginia authorities handcuffed a middle school student and charged him with larceny for "stealing" a milk carton from the school cafeteria earlier this year. The child has also been suspended from school.

In Prince William County, Virginia, the boy's mother Shamise Turk says police handcuffed and charged her son Ryan with stealing a carton of milk from the school cafeteria.

The school normally charges students 65 cents per carton for milk. Ms. Turk says Ryan is allowed to drink it for free, because he is registered on the school's lunch program.

Ms. Turk says one day Ryan went back to the lunch line to get his milk, and a Prince William County police officer approached him and accused him of stealing it.

Police say officers then handcuffed Ryan because the student "broke the rules and became disorderly," according to local news reports.

Ryan Turk told a local television news reporter that yes, he did pull back when the officer grabbed him.

"I yanked away from him I told him to get off of me because he's not my dad,” Ryan said.

Shamise Turk says her son was then taken to the principal's office, where officials searched the student for drugs. The school principal says "he was acting inappropriately."

"Because he was fidgety, kept pulling on the strings of his pants, and laughing when we were trying to talk to him and just wouldn't talk,” Shamise Turk said.

The school suspended her son for "theft, being disrespectful and using his cell phone."

The Prince William County Schools spokesman says, "the need for disciplinary action is determined by how a student behaves throughout any given incident...an appeals process is in place to ensure the fairness of any disciplinary action."

His mother says they're nuts.

Police told her the larceny charge is because he tried to "conceal" the milk, which Ryan denies.

He cannot go to school, and if the charges are upheld, he has a juvenile record and will have trouble getting into college or finding employment, among a host of other damaging things this does to young black men in America.

"I'm angry, I'm frustrated, I'm mad. It just went too far. They are charging him with larceny, which I don't have no understanding as to why he is being charged with larceny when he was entitled to that milk from the beginning," said Ms. Turk.