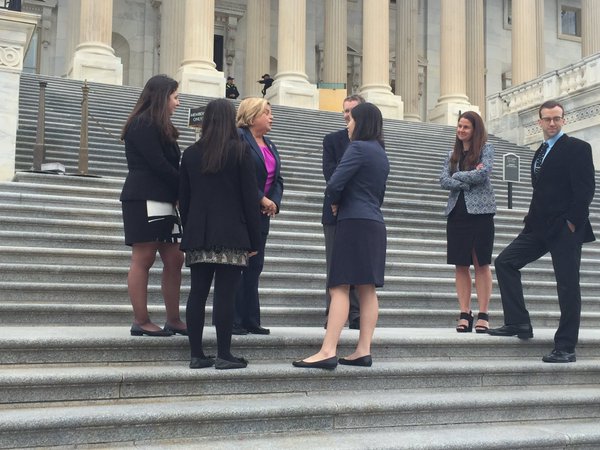 The teams did a remarkable job of digging into the nuance of the debate over crypto regulation, racial profiling, and privacy.

Arjun Srinivasan of Woodward Academy in Georgia argued against, noting that U.S. decisions about encryption would do nothing to force other countries to do likewise – so terrorists will always have other options, like burner phones and their own encryption, not to mention face-to-face communications.

And he said the Feinstein-Burr proposal has few fans among people who understand technology. “Do you know one scientist, mathematician or cryptographic expert who supports the CCOA?” Arjun asked.

“It’s not a question of scientific experts,” Zach answered. “Our support comes from policy makers and people involved in the process.”

But the bill “dramatically undermines cybersecurity,” argued Alexia Boulos of Florida’s Carrollton School of the Sacred Heart. “A single vulnerability is catastrophic for today’s interconnected web of internet devices. Burr-Feinstein means there will be millions of such vulnerabilities.”