Hugo Gernsback's introduction to the first issue of Amazing Stories, 1926 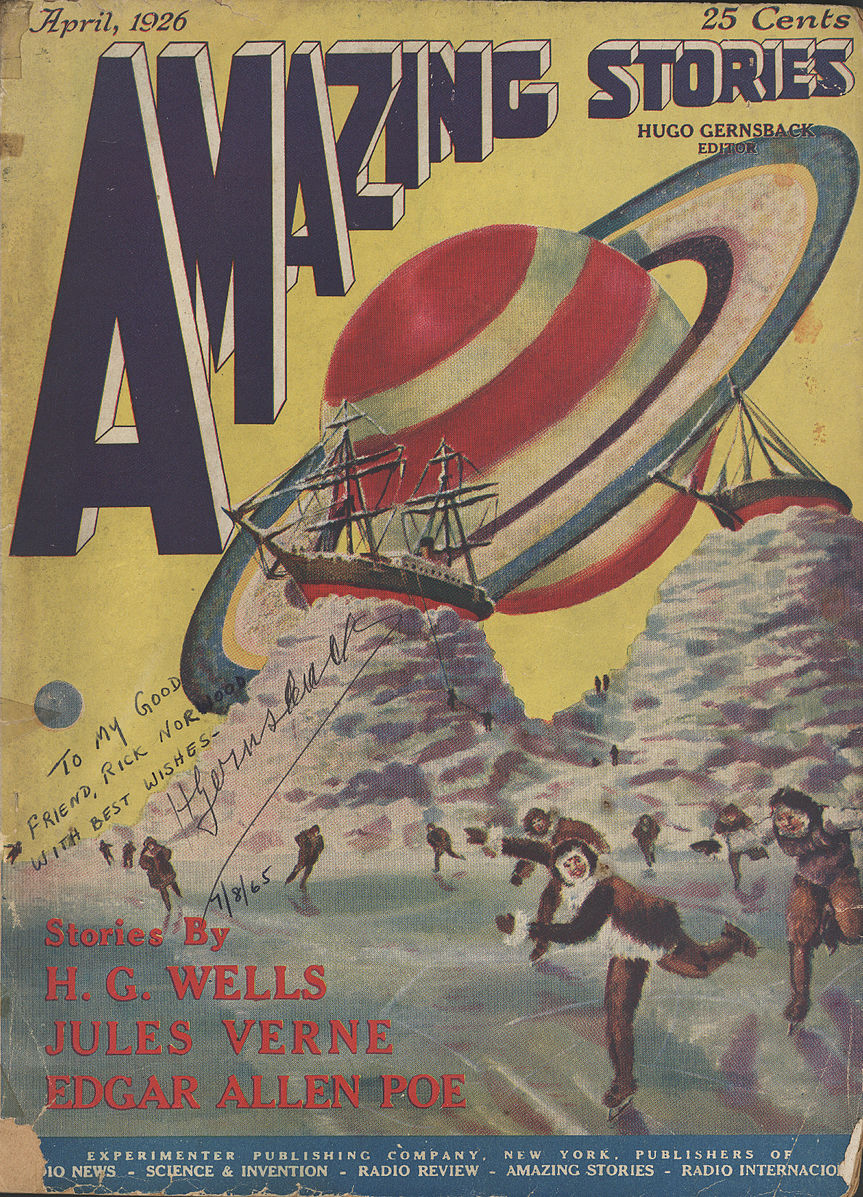 When Hugo "Award" Gernsback launched Volume 1, Number 1 of Amazing Stories in April, 1926, he created the first magazine in the world solely devoted to science fiction stories: on the magazine's editorial page, Gernsback laid out his vision for the genre.

Gernsback's "scientifiction" (his coinage, later supplanted by variants like "science fiction" and "sci-fi") traced its roots to Edgar Allen Poe, "cleverly weaving into and around the story, a scientific thread." Like his successors, Gernsback proposed this as a kind of vaccination against future shock: "the best of these modern writers of scientifiction have the knack of imparting knowledge, and even inspiration, without once making us aware that we are being taught." He also commits the original sin of science fiction: proposing it as a form of prophecy ("Prophecies made in many of their most amazing stories are being realized—and have been realized").

The whole first issue is available online (on the Internet Archive, where else?).

There is the usual fiction magazine, the love story and the sex- appeal type of magazine, the adventure type, and so on, but a magazine of “Scientifiction” is a pioneer in its field in America.

By “scientifiction” I mean the Jules Verne, H. G. Wells, and Edgar Allan Poe type of story—a charming romance intermingled with scientific fact and prophetic vision. For many years stories of this nature were published in the sister magazines of Amazing Stories—Science & Invention and Radio News.
But with the ever increasing demands on us for this sort of story, and more of it, there was only one thing to do—publish a magazine in which the scientific type of story will hold forth exclusively. Toward that end we have laid elaborate plans, sparing neither time nor money.

Edgar Allan Poe may well be called the father of “scientifiction.” It was he who really originated the romance, cleverly weaving into and around the story, a scientific thread. Jules Verne, with his amazing romances, also cleverly interwoven with a scientific thread, came next. A little later came H. G. Wells, whose scientifiction stories, like those of his forerunners, have become famous and immortal.

It must be remembered that we live in an entirely new world. Two hundred years ago, stories of this kind were not possible. Science, through its various branches of mechanics, electricity, astronomy, etc., enters so intimately into all our lives today, and we are so much immersed in this science, that we have become rather prone to take new inventions and discoveries for granted. Our entire mode of living has changed with the present progress, and it is little wonder, there- fore, that many fantastic situations—impossible 100 years ago—are brought about today. It is in these situations that the new romancers find their great inspiration.

Not only do these amazing tales make tremendously interesting reading—they are also always instructive. They supply knowledge that we might not otherwise obtain—and they supply it in a very palatable form. For the best of these modern writers of scientifiction have the knack of imparting knowledge, and even inspiration, without once making us aware that we are being taught.

And not only that! Poe, Verne, Wells, Bellamy, and many others have proved themselves real prophets. Prophecies made in many of their most amazing stories are being realized—and have been realized.

Take the fantastic submarine of Jules Verne’s most famous story, “Twenty Thousand Leagues Under the Sea” for instance. He predicted the present day submarine almost down to the last bolt! New inventions pictured for us in the scientifiction of today are not at all impossible of realization tomorrow. Many great science stories destined to be of an historical interest are still to be written, and Amazing Stories magazine will be the medium through which such stories will come to you. Posterity will point to them as having blazed a new trail, not only in literature and fiction, but in progress as well.

We who are publishing Amazing Stories realize the great responsibility of this undertaking, and will spare no energy in presenting to you, each month, the very best of this sort of literature there is to offer.

Exclusive arrangements have already been made with the copy-right holders of the entire voluminous works of ALL of Jules Verne’s immortal stories. Many of these stories are not known to the general American public yet. For the first time they will be within easy reach of every reader through Amazing Stories. A number of German, French, and English stories of this kind by the best writers in their respective countries, have already been contracted for and we hope very shortly to be able to enlarge the magazine and in that way present always more material to our readers.

How good this magazine will be in the future is up to you. Read Amazing Stories—get your friends to read it and then write us what you think of it. We will welcome constructive criticism—for only in this way will we know how to satisfy you.