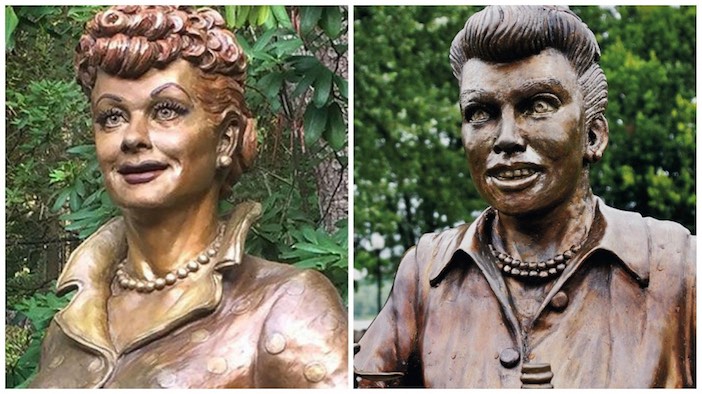 "Scary Lucy," the freakishly grotesque statue of Lucille Ball by sculptor Dave Poulin that for several years stood in her hometown of Celoron, New York, was joined this weekend by artist Carolyn Palmer's lifelike statue.

"People gasped when she was unveiled and everyone looked so happy," Palmer said.

In a 2015 letter to the Hollywood Reporter, Poulin stated that he meant no harm with his more creative depiction.


"I take full responsibility for 'Scary Lucy,' though by no means was that my intent or did I wish to disparage in any way the memories of the iconic Lucy image," Poulin wrote.


According to Celoron Mayor Scott Schrecengost, Scary Lucy will stay put "because it has been such an attraction.


"We've had thousands of people here over the past year from all over," he said. "...Even though the other statue is called 'Scary Lucy' or 'Ugly Lucy,' whatever the people want to call it, it's still artwork and not all artwork is beautiful."