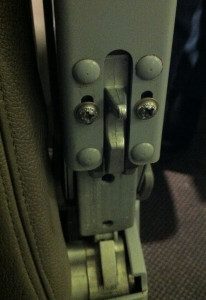 My friend, the brilliant Pam Grossman (What is a Witch, Phantasmaphile), posted the following discovery on her Facebook page.

You are undoubtedly already familiar with the fact that the armrests on plane seats can be raised and lowered, all expect for the aisle rest. Turns out, that one can also be raised, if you can find the lever. It's under the armrest (if it exists on your model aircraft) and probably looks something like the one above. Pam describes her squee in finding it to be a for-real feature:

I have been taking a lot of flights of late, and so I have garnered a few tips to offer re: how to make things *slightly* less horrid when doing so. But holy horses, this one changed my life on this last go-round. When I tried it - and it worked! - it was all I could do to keep from leaping to my feet and crowing about it to my fellow passengers like some sort of zealous banshee.

In the responses on her FB page, someone asked about the other "few tips" she alluded to. I asked Pam's permission to include her reply here. There may be a few useful ideas in here for you. I have recently become a convert of 1 & 2:

Oh, not secrets. Just silly little tips. Here are a few more: 1. TSA Pre-Check is highly worth it and makes everything so much better. 2. Buying a carry-on wheelie bag with 4 wheels that go in all directions is worth it 3. Wear the same outfit every time you travel, and it should have multiple layers, and a hood 4. Order the tomato juice, no ice (with a squeeze of lime if possible) and pretzels for a free meal 5. Buy the Tapas Snack Box on Delta. It has good hummus and enough snacks you can take with you for future meals 6. Though if they have 2 services, space them out. So snack box during 1st service, tomato juice during 2nd service or vice-versa 7. If, when you board, the overhead bins are getting full, put your bag on as soon as you find a spot before your seat, not after, otherwise it's a pain to have to swim upstream and get your stuff when you deplane 8. If the airline messes up (and they often do), definitely send a firm but polite note to them about it and tell them you want to be compensated somehow, which in my experience usually results in bonus mileage points. OH MAN, so much more, but that's a good start.

pic.twitter.com/Rloh34F5ID — Steadman™ (@AsteadWesley) June 17, 2020 The Hill reports that a pro-Trump activist named Brandon Straka was kicked off an American Airlines plane because he wouldn’t wear a mask. A New York Times reporter who was also on the flight took a video that recorded Straka arguing with the flight crew: “Sir, are you […]