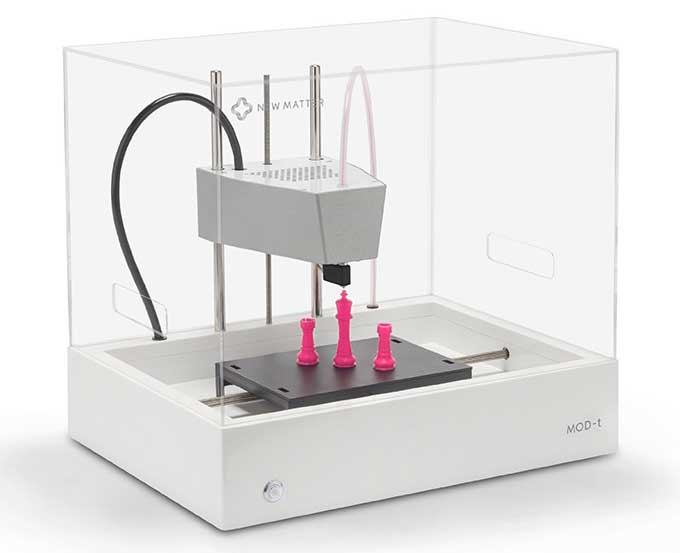 About 5 years ago, I bought a simple 3D printer*. It cost only $(removed), but it was fussy and the software was hard to use. The printer bed needed frequent adjusting, and the printed parts would get stuck to the printer bed. The overall quality of the prints was just OK, not great. Even with all of its finickiness and shortcomings, I found it useful for making simple repairs of stuff that broke around the house.

Last month, a company called New Matter sent me the new MOD-t 3D printer for review. The MOD-t also sells for $(removed) and also uses PLA filament, and I was curious to see how two similarly priced printers from then and now compare. After using the MOD-t almost daily, I can say with confidence that it is much, much better in every way than my five-year-old 3D printer.

The MOD-t has a sleek design. It's white, with a clear plastic shell that covers the printing area. The cover keeps the temperature consistent and reduces the noise considerably. The old 3D printer didn't have a cover and it was noisy. The MOD-t also has a fan to help set the plastic after it comes out of the heated extruder head. The helps greatly to reduce sagging of overhanging features on the part being printed.

Setup was a breeze. I went to the New Matter website, downloaded the application and followed the prompts. The MOD-t has built in Wi-Fi, which means I don't have to tether my computer to it with a USB cable while using it. This allows me to print in another room while I'm in my office. This is a big plus, because some parts can take hours to print.

The software is easy to use. I always had trouble with Repetier Host, the program that prepares a print and drives the printer. I'd have to specify the size of the print bed, the temperature and diameter of the filament, how to "slice" the 3D model, and so on. With the MOD-T, it's a simple matter of dragging an STL or OBJ file (I usually do my designs in TinkerCad or just download them from Thingiverse) into the window and printing it. The ease-of-use alone makes the MOD-t light years ahead of my old 3D printer.

The printer bed is also much improved. My old 3D printer was a piece of laser cut plywood bolted to a frame that moved along X-Y axes. It was almost impossible to adjust, requiring many test prints to prevent parts from coming out with weird angles. It needed frequent recalibration. Also, parts stuck to it, even when I used aluminum tape and blue painters tape. The printer bed was the worst thing about it. The MOD-t printer bed is genius. It's made of plastic and can be lifted right off the mechanism that moves it around, which makes it easy to remove parts from the bed. The MOD-t levels the X-Y-Z axes in software so parts are always square. And new bed plates can be purchased for a low price from New Matter.

How about the quality of the printed parts? They are excellent. It handles overhangs very well, and the surfaces are smoother and cleaner than parts printed on my old printer. I did experience warping on large blocky pieces. I ended up covering the bed with blue tape and covering the holes in the plastic cover with tape and the warping almost completely went away.

I've just scratched the surface of the MOD-t. I could have talked about filament loading, integration with the New Matter Store, how to remove a print from the bed, and so on, but you can learn about this stuff by going to New Matter's YouTube channel. Sample:

This is one fantastic printer. I'm having a blast with it.

*I'm not going to say the name of the printer, because I'm sure their latest model is much improved.