Questioning the nature of reality with cognitive scientist Donald Hoffman 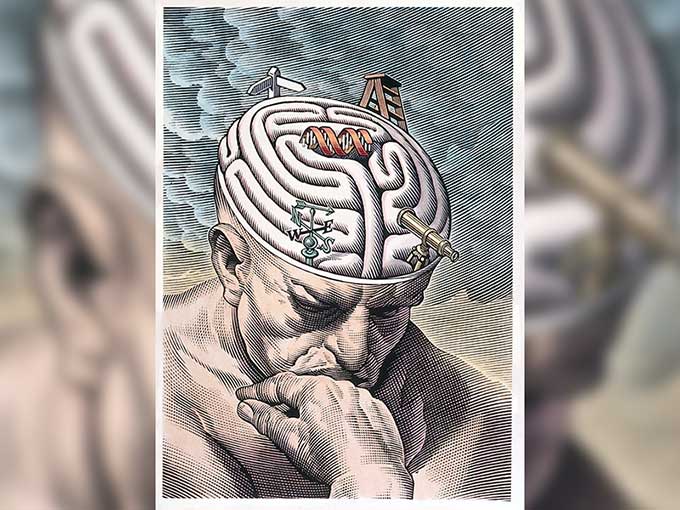 Back in the early 1900s, the German biologist Jakob Johann Baron von Uexküll couldn’t shake the implication that the inner lives of animals like jellyfish and sea urchins must be radically different from those of humans.

Uexküll was fascinated by how meaty, squishy nervous systems gave rise to perception. Noting that the sense organs of sea creatures and arachnids could perceive things that ours could not, he realized that giant portions of reality must therefore be missing from their subjective experiences, which suggested that the same was true of us. In other words, most ticks can’t enjoy an Andrew Lloyd Webber musical because, among other reasons, they don’t have eyes. On the other hand, unlike ticks, most humans can’t smell butyric acid wafting on the breeze, and so no matter where you sit in the audience, smell isn’t an essential (or intended) element of a Broadway performance of Cats.

Uexküll imagined that each animal’s subjective experience was confined to a private sensory world he called an umwelt. Each animal’s umwelt was different, he said, distinctive from that of another animal in the same environment, and each therefore was tuned to take in only a small portion of the total picture. Not that any animal would likely know that, which was Uexküll’s other big idea. Because no organism can perceive the totality of objective reality, each animal likely assumes that what it can perceive is all that can be perceived. Each umwelt is a private universe, fitted to its niche, and the subjective experiences of all of Earth’s creatures are like a sea filled with a panoply of bounded virtual realities floating past one another, each unaware that it is unaware.

Like all ideas, Uexküll’s weren’t completely new. Philosophers had wondered about the differences in subjective and objective reality going back to Plato’s cave (and are still wondering). But even though Uexküll’s ideas weren’t strictly original, he brought them into a new academic silo – biology. In doing so, he generated lines of academic research into neuroscience and the nature of consciousness that are still going today.

For instance, when the philosopher Thomas Nagel famously asked, “What is it like to be a bat?” he thought there was no answer to his question because it would be impossible to think in that way. Bat sonar, he said, is nothing like anything we possess, “and there is no reason to suppose that it is subjectively like anything we can experience or imagine.” All one can do, said Nagel, is imagine what it would be like for a person, like yourself, to be a bat. Imagining what it would be like for a bat to be a bat is impossible. This was part of an overall criticism on the limits of reductionist thinking, and is, of course, still the subject of much debate.

The siblings of these notions appear in the writings of everyone from Timothy Leary with his “reality tunnels” to J.J. Gibson’s “ecological optics” to psychologist Charles Tart and his “consensus trances.” From the Wachowski’s Matrix to Kant’s “noumenon” to Daniel Dennett’s “conscious robots,” we’ve been wondering about these questions for a very long time. You too, I suspect, have stumbled on these problems, asking something along the lines of “do we all see the same colors?” at some point. The answer, by the way, is no.

The assumption in most of these musings is that we humans are unique because we can escape our umwelten. We have reason, philosophy, science, and physics which free us from the prison of our limited human perceptions. We can use tools to extend our senses, to see the background radiation left behind by the big bang or hear the ultrasonic laughter of ticklish mice. Sure, the table seems solid enough when we knock on it, and if you were still trapped in your umwelt, you wouldn’t think otherwise, but now you know it is actually mostly empty space thanks to your understanding of protons and electrons. We assume that more layers of truth reveal themselves to us with each successive paradigm shift.

In this episode of the You Are Not So Smart podcast, we sit down with a scientist who is challenging these assumptions.

Donald Hoffman, a cognitive psychologist at the University of California with a background in artificial intelligence, game theory, and evolutionary biology has developed a new theory of consciousness that, should it prove true, would rearrange our understanding of not only the mind and the brain, but physics itself.

“I agree up to a point,” said Hoffman, “that different organisms are in effectively different perceptual worlds, but where I disagree is that these worlds are seeing different parts of the truth. I don’t think they are seeing the truth at all.”

Hoffman wondered if evolution truly favored veridical minds, so he and his graduate students created computer models of natural selection that included accurate perceptions of reality as a variable.

The implication, Hoffman said, is that an organism that can see the truth will never be favored by natural selection. This suggests that literally nothing we can conceive of can be said to represent objective reality, not even atoms, molecules, or physical laws. Physics and chemistry are still inside the umwelt. There’s no escape.

“If our perceptual systems evolved by natural selection, then the probability that we see reality as it actually is, in any way, is zero. Precisely zero,” said Hoffman.

Well aware that these ideas come across as woo, Hoffman welcomes challenges from his peers and other interested parties, and in the interview you’ll hear what they’ve said so far and how you can investigate these concepts for yourself.

Also in the show, Hoffman explains his ideas in detail in addition to discussing the bicameral mind, artificial intelligence, and the hard problem of consciousness in this mindbending episode about how we make sense of our world, our existence, and ourselves.

This episode is sponsored by EXO Protein Bars. EXO makes all-natural protein bars using cricket flour, a sustainable and complete source essential amino acids, high in iron, that produce 100x less greenhouse gas than cows. Oh yeah, and you’ll never know its crickets because they are delicious and designed by a three-Michelin-star chef. Get your four-bar sample pack by visiting EXOProtein.com/sosmart.

What if Evolution Bred Reality Out of Us?

The Case Against Reality

David Eagleman on the Umwelt

It brings me, and my future sheltered-in-place mail art projects, a lot of joy that Ruth Asawa postage stamps have been announced. Sadly, USPS hasn’t revealed the release date just yet. So, instead, I’ll just be over here clicking “refresh.” Showcasing Asawa’s wire sculptures, the pane includes 20 stamps, with two each of 10 designs, […]

In a live broadcast Sunday, Queen Elizabeth II spoke about the coronavirus situation. It was a serious and reassuring speech. But, she wore a green dress, a green-screen-green dress. The internet, starting with Peter Chiykowski, took it from there. A few of you said my queenscreen photoshops are disrespectful, and you're right. The Queen is […]

From the Washington Post: During a time of global crisis, climbing death tolls and widespread uncertainty, New Zealand Prime Minister Jacinda Ardern has been hailed globally for her compassionate handling of the coronavirus pandemic. She continued to win hearts Monday when she clarified who exactly has made a list of “essential workers.” “You’ll be pleased to know that […]