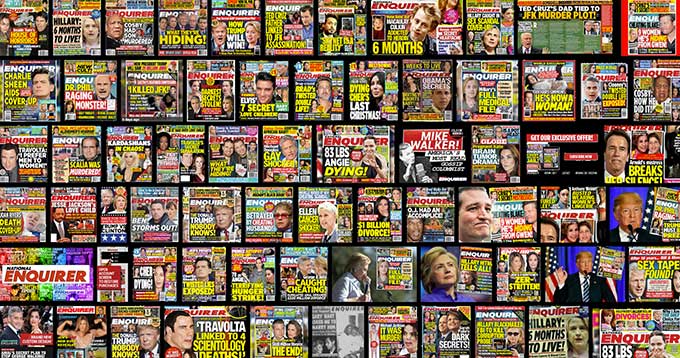 The election may be over, but this week's tabloids see it as their constitutional duty to continue slinging political mud. Donald Trump has taken charge, Malia Obama is in rehab, and Bill Clinton is ravaged by cancer, proclaims this week’s Trump mouthpiece the ‘National Enquirer,' for good measure adding that actor Alec Baldwin only dislikes Trump because his ex-wife Kim Basinger had a crush on the president-elect. How happy is the ‘Enquirer’ with its past year’s political coverage? "The Enquirer forged into the political arena in a way we had never done before, influencing the election with scoop after groundbreaking scoop,” writes ‘Enquirer’ editor-in-chief Dylan Howard in a self-congratulatory op ed, no doubt referring to such classics as the magazine's unsubstantiated claims that Ted Cruz’s father aided Lee Harvey Oswald’s assassination of President John F. Kennedy, Hillary Clinton is suffering an array of potentially lethal illnesses including a “time bomb” brain aneurysm, and Bill Clinton has Alzheimer’s disease. “Mainstream media is the Real Fake News!” writes “the most feared voice in politics," former White House advisor Dick Morris, in the ‘Enquirer,’ which may be the embodiment of Orwellian Newspeak, when the birthplace of fake news dares to claim that it is the only purveyor of truth. ‘Enquirer’ stablemate the ‘Globe’ refuses to be left out of the fun, with its cover revealing “Hillary’s Nervous Breakdown on Election Night!” As Trump’s improbable victory became clear on election day, Hillary “became more and more unhinged and ‘started belting back booze to numb her shock’,” until she was “weeping and incoherent,” according to an unnamed source. Disappointment, anger and denial are responses you’d expect from Hillary under the circumstances. But a nervous breakdown? It’s thanks to the ‘Globe’ insisting that all its White House correspondents are medically trained and have degrees in psychology that we have such accurate reporting that you won't find anywhere else in the fake news offered up by the mainstream media.

So what does real news look like this week? Malia Obama is in rehab, reports the ‘Enquirer,’ based on the claim that the president's 18-year-old daughter “hasn’t been seen in public for months!” Because if the ‘Enquirer’ can’t see you, you must be hiding, right? Like tennis ace Jennifer Capriati, who the ‘Enquirer’ claims is now a "hermit” simply because she doesn’t attend the Hollywood nightclubs and red carpet events where paparazzi lurk, and is therefore in hiding. Oscar winner Gene Hackman is a “boozy recluse” claims the ‘Globe,” because the ‘French Connection’ star has the audacity to live quietly in New Mexico “cooped up” behind the walls of his mansion. So he never leaves his home? Of course he does. Locals tell the ‘Globe’ that he’s seen driving around, and can be found at a local bar “from time to time to drink booze.” So he’s the kind of recluse who drives around town and hangs in bars. Sounds pretty sociable for a hermit. And it allows the ‘Globe’ to call him “boozy.” That’s certainly news that the mainstream media missed. Is Bill Clinton “ravaged by cancer” as the ‘Enquirer’ reports? The former president has lost 40 pounds in weight, which prompts the ‘Enquirer’ to write that “skeletal Bill spurs cancer fears!” Yes, it’s yet another case where unidentified “friends fear” an outcome that in the ‘Enquirer’ becomes fact. Poetically, this story is positioned right next to the ‘Enquirer’ proclamation that “mainstream media is the real fake news.”
The ‘Enquirer’ also tells us that Kim Kardashian’s Paris kidnapper has been caught on camera, though even its report admits that it obtained its photos from “alleged security camera footage” - meaning it doesn’t trust that it has the real thing, and may have been hoodwinked into buying hoax photos. Even if genuine, the images are so dark, murky and blurry that it might take forensic experts to confirm that the alleged kidnapper is even human. Brad Pitt has undergone a facelift, claims the ‘Enquirer,’ offering as proof a photograph of his ear purportedly revealing scars left by a facelift, even though the photo shows no such scars, and his jawline seems unchanged from past years, though he may have lost a pound or two.

Brad and Angelina Jolie’s custody battle is explored at length by both ‘People’ and ‘Us’ magazines, neither offering anything new that hasn’t come out in court papers. “No kids at Christmas?” asks the ‘Us’ cover over a photo of Brad with his signature jawline, though the story within notes that Pitt is entitled to supervised visitation with his six children, and a source adds: “Brad hopes to see the kids for Christmas.” ‘So its cover question is purely rhetorical. 'People’ mag devotes its cover to the husband-and-wife co-stars of TV’s reality series ‘Flip or Flop,’ Christina and Tarek El Moussa, whose “marriage explodes” under “the pressures of fame,” according to the report. They have been separated for months but living the lie of a happy marriage, which I’m sure has nothing to do with the fact that they are about to start filming a new season of their show and have a book coming out in March. Meanwhile reality TV’s Bachelorette couple JoJo and Jordan are “happier than ever” and “envisioning babies.” Because that’s how mainstream media does real news.

Fortunately we have ‘Us’ magazine’s crack investigative team to tell us that Victoria’s Secret model Alessandra Ambrosio wore it best (well, she’d be a pretty poor model if she didn’t wear it best), 89 per cent of survey respondents prefer Marion Cotillard without bangs, and that the stars as just like us: they run errands, feed parking meters, and shop for the holidays. And they say the mainstream media doesn’t report real news any more!

We have the ‘National Examiner’ to thank for reporting that a granite pyramid in the frozen reaches of Antarctica may be “proof of prehistoric civilization,” supposedly because natural phenomena could never produce a symmetrical giant pyramid, built by early humans “or some type of beings.” The ‘Examiner’ helpfully adds an artist’s impression of a giant flying saucer above the antipodean pyramid, because isn’t that what “real news” is these days - just an artist’s impression?