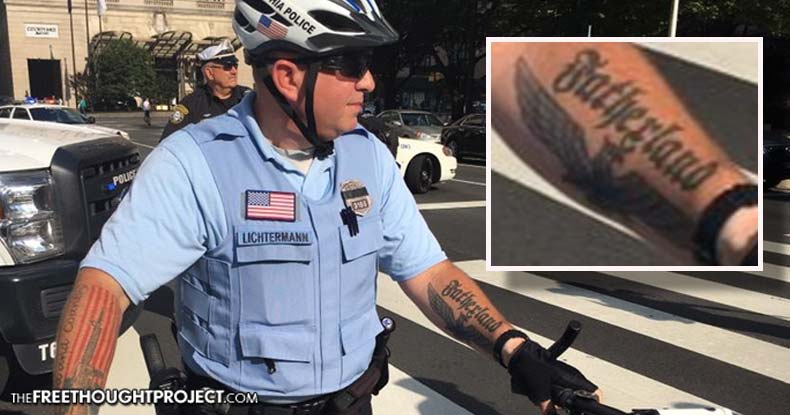 It won't surprise you to learn American policing has a racism problem. It may surprise you to know that the FBI has been quietly, systematically investigating the white supremacist infiltration of law enforcement.

Alice Speri writes that there's just not much anyone in politics is willing to do about it—and an inevitable conservative-led backlash when they try—but the FBI is starting to treat local cops the way it treated hippies: as a problem worth getting its hands dirty over.

"For some reason, we have stepped away from the threat of domestic terrorism and right-wing extremism," Jones continued. "The only way we can reconcile this kind of behavior is if we accept the possibility that the ideology that permeates white nationalists and white supremacists is something that many in our federal and law enforcement communities understand and may be in sympathy with."

Although officers have been fired for expressing hateful views — sometimes to be re-hired by other departments, as happens regularly with officers accused of misconduct — some officers have also challenged those dismissals in court. Robert Henderson, an 18-year veteran of the Nebraska State Patrol, was fired when his membership in the Klan was discovered. He sued on First Amendment grounds and appealed all the way to the U.S. Supreme Court, which declined to hear his case. Last year, 14 officers in the San Francisco Police Department were caught exchanging racist and homophobic texts that included several references to "white power" and messages such as "all niggers must fucking hang." Most of those officers remain on the force after an attempt to fire several of them was blocked by a judge, who said the statute of limitation had expired.

No centralized recruitment process or set of national standards exists for the 18,000 law enforcement agencies in the United States, many of which have deep historical connections to racist ideologies. As a result, state and local police as well as sheriff's departments present ample opportunities for white supremacists and other right-wing extremists looking to expand their power base.

Part of the problem: when the Department of Homeland Security released a study on extremism, Republicans railed against the unforgivable insult it represented against patriotic officers and veterans. This hindered further action against white supremacists throughout the Obama administration.

"I believe that because that report was so denounced by conservatives, it sort of closed the door on whatever the FBI may have been considering doing with respect to combating infiltration of law enforcement by white supremacists," said Samuel Jones, a professor of law at the John Marshall School of Law in Chicago who has written about white power ideology in law enforcement. "Because after the 2006 FBI report, we simply cannot find anything by local law enforcement or the federal government that addresses this issue."

Pete Simi, a sociologist who spent decades studying the proliferation of white supremacists in the U.S. military, agreed. "The report underscores the problem of even discussing this issue. It underscores how difficult this issue is to get any traction on, because a lot of people don't want to discuss this, let alone actually do something about it."