Weasel electrocuted at CERN to go on museum display 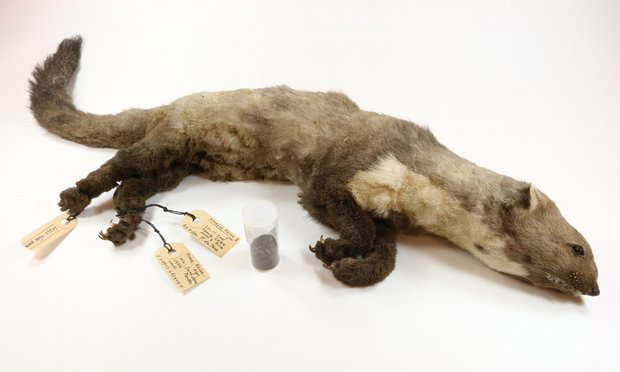 Last April, a weasel-like stone marten jumped a substation fence at the Large Hadron Collider (LHC) near Geneva, Switzerland and was promptly electrocuted. Now, that same poor creature's corpse is going on display at the Rotterdam Natural History Museum in an exhibition titled Dead Animal Tales. From The Guardian:

The stone marten is the latest dead animal to go on display at the museum. It joins a sparrow that was shot after it sabotaged a world record attempt by knocking over 23,000 dominoes; a hedgehog that got fatally stuck in a McDonalds McFlurry pot, and a catfish that fell victim to a group of men in the Netherlands who developed a tradition for drinking vast amounts of beer and swallowing fish from their aquarium. The catfish turned out to be armoured, and on being swallowed raised its spines. The defence did not save the fish, but it put the 28-year-old man who tried to swallow it in intensive care for a week....


“We want to show that no matter what we do to the environment, to the natural world, the impact of nature will always be there,” (museum director Kees) Moeliker said. “We try to put a magnifying glass on some fine examples. This poor (stone marten) literally collided with the largest machine in the world, where physicists collide particles every day. It’s poetic, in my opinion, what happened there.”