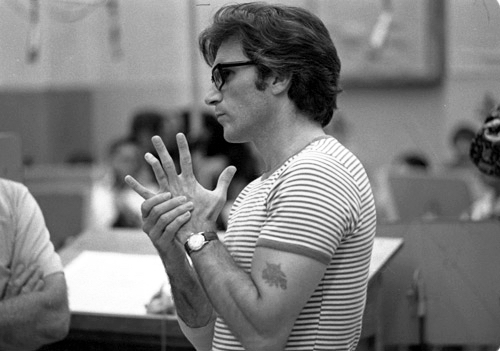 
While a contemporary of, and somewhat analogous to, idiosyncratic composer/arrangers like Van Dyke Parks, Axelrod was much more influenced by jazz, as reflected in his orchestrations and his own compositions. He produced David McCallum's Music: A Bit More of Me, the 1967 release featuring "The Edge," a song that famously turned into the predominant sample in Dr. Dre's 2000 hit "The Next Episode." He also collaborated with the Electric Prunes on their bizarre 1968 album Mass in F# Minor, and when the group splintered in the middle of recording, he finished it with session musicians.

So sad to hear about the passing of musician/composer #DavidAxelrod. He was so immersed in creativity and so pure with his arrangements he WAS hip hop. And understood and appreciated hip hop culture (most cats would get guarded about time moving on & easily take the "NO!!!!!!!!" disposition if they aren't informed. David embraced and often reached out to producers and beatmakers for cool collabos) he appreciation for music and his ability to recognize musicianship is what I'll take from him. Rest in Melody.

Just a few of the David Axelrod samples in hip-hop. He was easily one of the most brilliant composers of the last half century. pic.twitter.com/hSnlsPwWx4