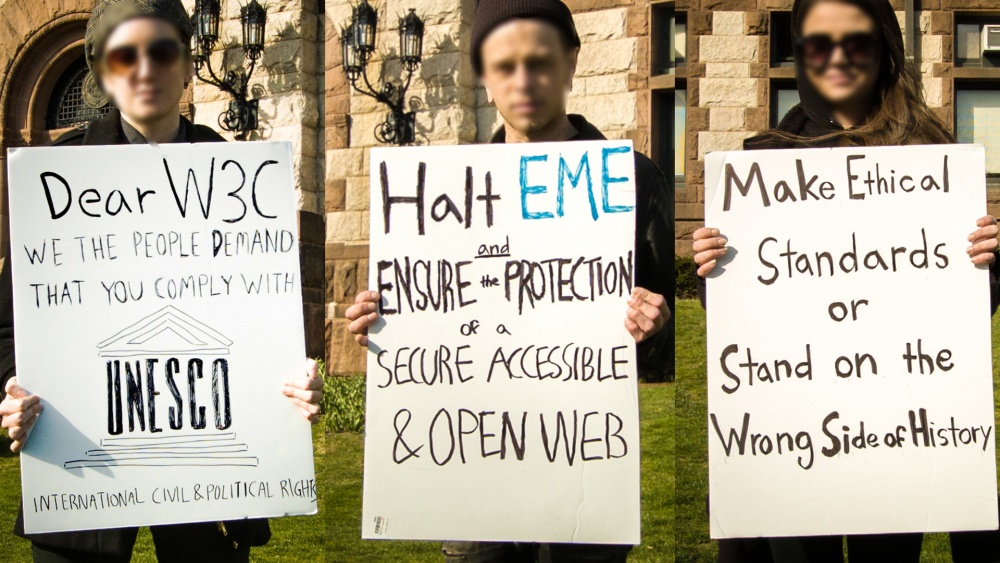 Today, activists will gather in Cambridge, Mass to march to the offices of W3C Director Tim Berners-Lee to urge him to keep DRM out of the standards for the open web.

The controversial project to standardize DRM for streaming video on the web started in 2013 and culminated last month with a poll by W3C members whose results are confidential (though the W3C has chosen to publish the outcomes of previous polls and may yet do so for this one).

Many of the members who voted in that poll endorsed a compromise advanced by the EFF: to go ahead with DRM, but only if members sign an amendment to the current membership agreement, promising not to use DRM laws to attack people engaged in legitimate activity like adapting the standard for people with disabilities, investigating security and privacy defects, and adding lawful features to video tools.


Several of the members who voted for this have given me permission to disclose their support for not publishing the standard without these protections, include the Royal National Institute for Blind People, the German National Library, Open University, Oxford University, Eindhoven University, Brave, Ethereum, and many, many others.

There has never been a situation in which the W3C polled its members on the eve of publishing a standard, only to learn that there was no consensus among the members as to whether or how to proceed. This unprecedented situation was created by the DRM advocates at the organization, who voted last year to halt any discussion of an amendment to the membership agreement, walking out on negotiations and guaranteeing no further progress.

In so doing, they were effectively betting that the opposition to standardizing DRM would weaken at the W3C, but instead, it has grown and grown, and has been joined by outside opposition from hundreds of groups and individuals, including human rights groups from the global south, the world's leading archivists, the world's foremost expert on net neutrality, and members of the European Parliament.

The W3C is structured as a "benevolent dictatorship" in which unforeseen situations are adjudicated by the Director -- that is, Tim Berners-Lee -- who is now at a crossroads, charged with deciding whether his organization will veer away from the potentially dangerous step of giving its members the right to sue people engaged in legitimate, vital activities that safeguard accessibility, security, archiving and competition, or whether he'll give tech and entertainment's largest corporations the what they want, over the objections of the world's leading security researchers, new entrants into the browser market, cryptocurrency startups, human rights groups, Unesco, and public interest advocates.

The march to Berners-Lee's office was organized by the Ethics in Tech, a new activist group made up of artists. Though I didn't have anything to do with the planning (and will not be able to attend), I'm grateful that they're helping to keep this issue alive. The open web -- weakened by walled-garden apps and the collapse of competition in internet companies -- is at a critical juncture. I have utmost respect and admiration for Berners-Lee as an historic staunch advocate for the open web, but I believe he's made the wrong call here, and that belief is shared by a huge constituency both inside and outside the W3C. I can only hope that he embraces the compromise spirit that has been behind the W3C's success to date and tells his corporate members that they can't walk away from the negotiating table and then insist that no compromise is possible.

Plan of Action (Saturday, May 13th)

Loop back to Mass Ave and continue demonstrating on MIT Campus

RSVP to trllmstudio@gmail.com (encouraged but not required)

Ethics In Tech Activists will meet on Cambridge City Hall Lawn at 2p.m. to get in formation: distribute signs, literature packets to marchers, and apply anti-face detection make-up (colorful shapes that obfuscate identity recognition). We will then proceed to march down Mass Ave towards MIT. The idea is educate bystanders by distributing literature and engaging in discussion. Members of the march most knowledgable about the issue will be in charge of canvasing the public, These point-people might split off to spend more time with an individual before rejoining the group.

Upon reaching MIT CSAIL, the march will deliver a message to W3C in the form of a prepared speech. We will then continue on to the Google and Microsoft Buildings to deliver a message of “You Don’t Own Our Voices” We will then loop back to Mass Ave and continue demonstrating and educating the public in front of the MIT campus.
We do not have a permit for this action, as we are not addressing any governmental body, rather a private company. In order to make sure we are not shut-down or have any issues with law enforcement, we will not be using as amplification devices (voice power only) and we will stick to the sidewalks, no occupy private or public space, no going inside any buildings, no blocking traffic. or crosswalks

As the Web's inventor flirts with disaster, Boston artists are putting out a call: March with us this Saturday